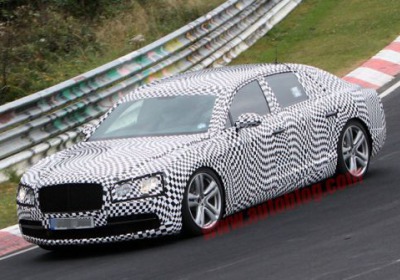 The redesigned Bentley Continental Flying Spur has again been caught undergoing testing, though this time away from public roads while tackling the Nürburgring's 154 turns. The car we see in these new spy shots also reveals more of the Flying Spur's new lines, which we expect to largely mirror the shape already seen on the new Continental GT and GTC models.

Likewise, the new four-door Continental will probably come with the same engine options as the coupe and convertible: the tried and true 6.0-liter W12 making 567 horsepower and the new twin-turbo 4.0-liter V8 producing 500 hp. Its two stablemates were also updated with an eight-speed transmission for 2012, so expect the Spur to swap that many gears, as well.

Really, the only unknowns left are how Bentley will be handling the four-door specific design elements like the shape of the rear end, which is somewhat obscured by this car's checkerboard camo, as well as when the sedan will debut. We've received no indication thus far that Bentley is planning to use the Paris Motor Show, which happens later this week, for the Flying Spur's unveiling. That leaves a string of upcoming shows where it could happen, including the LA Auto Show, Detroit Auto Show and Geneva Motor Show.