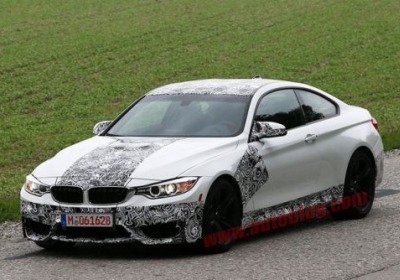 2013 is the year for Lamborghini, Aston Martin and the Porsche 911, but 2016 will be the year for BMW. That's when the Munich-based maker of the Ultimate Driving Machine will celebrate its 100th birthday, with what will probably be a year-long celebration. Part of that 365-day party will, reportedly, be an even hotter version of the new BMW M4, which is set to debut in January at the Detroit Auto Show.

Yes, according to Australia's Car Sales, the über-M4 has been hinted at by higher-ups at BMW's M division, who claim the rear seats will be removed, much like the M3 GTS, while other weight-saving measures will be used to try and bring the M4's weight below 3,000 pounds. There's no mention of engine mods, but if the M4's biturbocharged six is as good as we think it'll be, that's not a deal-breaker for us.

The lightening process on the so-called M4 GTS would involve replacing the hood and front fenders with parts made of carbon fiber, while the doors would switch from steel to aluminum. Besides the deletion of the rear seats, Car Sales is predicting lightweight racing buckets, with a carbon-fiber shell and a minimal amount of padding. Expect lots and lots of Alcantara, in place of leather.

This wouldn't be a reborn M3 CSL, though, with one source at M saying, "It's difficult for a CSL today. We have already major steps that we would have taken, like thinner glass and lighter seats and lighter wheels and less sound deadening. We've already done all of that [in the current car]." Regardless, the idea of a seriously stripped out, two-door M is something we're really looking forward to seeing. Of course, neither the M3 GTS or CSL were offered in the US market, so if you live in the land of the free and home of the brave, don't get too excited just yet.