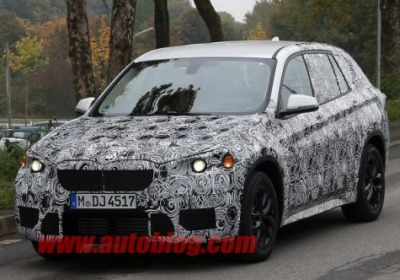 It was just a few weeks ago that we got our first glimpse of the next-generation BMW X1, riding around on a flatbed. Now, we have the first batch of images of the small crossover moving under its own steam.

Like the previous round of photos, BMW's psychedelic camouflage is on hand to obscure sheetmetal details, but our intrepid spies still managed to discover a bit about the new X1. It's internal code-name will be F48, and it will sit on the same platform as the next-generation Mini and the BMW 1 Series GT. And for those keeping track at home, those are both front-drive platforms.

The reasoning for the X1's new layout, though, is understandable. Front-wheel drive is more space efficient and affordable, which are kind of big deals to customers. The next X1 won't be limited to its front wheels, though, as BMW's xDrive system is almost a certainty on higher-end trims.

We can expect to see the second-generation X1 on the auto show stage at the 2015 Frankfurt Motor Show as a 2016 model.