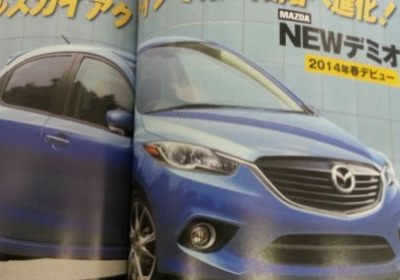 The styling changes at Mazda are proceeding at a fairly quick tempo. The CX-5 was unveiled, followed by a refreshed CX-9, the excellent Mazda6, and most recently a new Mazda3. This all happened over the course of less than two years, which in the auto industry is like a long week.

Now the Mazda2 is getting its revamp. Thanks to a magazine scan from Japan, we now have our first look at the new sub-compact, called the Demio, in its home market. Mazda's familial front end has been fitted, and it doesn't look quite as suited to the smaller car. Lacking the long-hood look of the Mazda3 and Mazda6, the new styling looks overly rounded, almost bulbous from our angle. It's still attractive, but the shape is kind of off-putting compared to the chiseled faces of the 2's big brothers. We'll concede that the folded magazine page may have something to do with it, however.

The next-generation 2 should adhere to Mazda's Skyactiv philosophy, which means we can expect a highly efficient four-cylinder engine, although it's impossible to say if Mazda will do away with its smallest offering's one-engine strategy. Considering the Mazda2 will be riding on a shortened version of the CX-5's platform, we'd expect some degree of mechanical parts sharing, regardless of how much the larger platform needs trimmed. Perhaps a detuned version of the 2.0-liter, Skyactiv four-cylinder could be under the 2's hood?

According to our poster, we'll see the next Mazda2/Demio in the spring of 2014, likely as a 2015 model. That timing makes predicting which show it'll be unveiled at difficult. New York, Beijing, and Geneva all fall in the spring months, and are three of the biggest shows on the planet. Our money is on New York or Beijing, which lack the supercar glitz found in Switzerland. We'll have more before then.