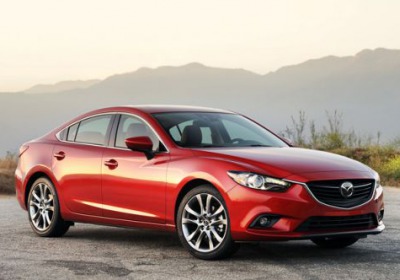 The 2014 Mazda6 is our most recent addition to the Autoblog long-term fleet, and we spent the month of June getting to know our Soul Red tester, generally enjoying the honeymoon phase of this twelve-month relationship. During June, the Mazda6 spent the majority of its time with director of photography Drew Phillips, who in addition to putting together this pretty gallery of our rakish long-term car, had a lot to say about it as a daily driver.

You see, not too long before Mazda delivered our long-term 6, Drew bought a 2014 CX-5 crossover to support his growing family. The CX-5 was the first vehicle to use Mazda's full suite of Skyactiv technologies, and we've generally enjoyed the good-to-drive CUV. A lot of that CX-5 goodness lies beneath the more shapely lines of this sleek Mazda6 sedan, so it's only fitting that Drew had a lot of comparisons between Mazda's two housemates during his month behind the wheel.


A few folks have noted that Mazda's interiors, while better than the previous generations, still don't look and feel as up-to-date as what other automakers are doing in the class. But that doesn't mean Mazda is doing anything bad, and Drew agrees.


Everything is laid out intuitively so you don't have to hunt to find controls.

"The materials used are fairly good all around, and everything is laid out intuitively so you don't have to hunt to find controls," he writes. "The leather seats are comfortable and use a higher-quality material than the CX-5. The red stitching is a nice touch that gives the interior a sporty, upscale look."

"Some might complain about the size of the touchscreen. It's definitely not large, but for me it was never an issue. The only thing that's noticeably lacking is the navigation system. It just doesn't have enough detail in the screen," Drew writes. Indeed, Mazda's tech still feels a generation behind here in the 6, though a lot of that has been addressed with the updated system and seven-inch touchscreen found in the 2014 Mazda3. Still, "The center console control knob is a nice addition compared to the CX-5. You can easily control media/navigation functions without having to look away from the road. The materials used are fairly good all around, and everything is laid out intuitively so you don't have to hunt to find controls."

On the performance side, the 2.5-liter naturally aspirated inline four-cylinder engine is breaking in nicely, and we're seeing relatively good fuel economy right from the start. Our car isn't fitted with Mazda's nifty new i-Eloop regenerative braking system that reportedly increases fuel economy to 28/40 miles per gallon city/highway (up from 26/38 mpg). That said, Drew notes how "easy it is to get good fuel economy" and that the Mazda6 "could probably exceed the 38 mpg highway if you really tried."


The Mazda6 "could probably exceed the 38 mpg highway if you really tried."

Of course, the Mazda6 isn't exactly a speed machine. Drew notes, "The engine won't exactly give you a rush, but it's good enough. It never felt strong, but I never found it lacking on an on-ramp either. Good combination of performance and efficiency." But what's most important here is the ride/handling balance – something Mazda has long been known to exceed at. Other staffers who have had the opportunity to drive the Mazda6 in other variations have given the car nothing but compliments, and generally speaking, Drew noted that the car handles pretty well and, also importantly, it's quiet.

Overall, "Everything I love about the CX-5 is why I like the Mazda6. No-nonsense and intuitive interior, fun to drive, good gas mileage, great looks."

Next month, we'll hear from west coast editor Michael Harley, who in addition to properly wringing out the Mazda6 on some of southern California's best roads, will talk about how the car performs its intended functions as a family sedan for folks with older kids. Stay tuned.