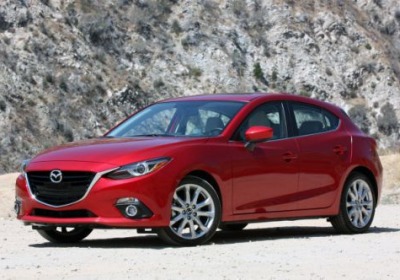 It's hard not to be smitten with the 2014 Mazda3; after all, just look at it. But beyond its slick lines, we found the new compact hatch to be a pretty remarkable steer, offering up good levels of comfort and refinement, not to mention functionality and engagement. Now, there's more reason to like the 2014 Mazda3, as we've just learned that the car will officially be rated at 30 miles per gallon city and 41 mpg highway.

Mazda also offers a larger 2.5-liter inline-four in the 3, and while a six-speed automatic will be the only transmission available with this engine at launch, the automaker has confirmed that a manual is coming shortly. With the 6AT and 2.5, the Mazda3 sedan is rated at 28/39 mpg, or 29/40 with the company's i-Eloop regenerative braking system. Hatchback models shrink those numbers to 28/37 and 29/39 mpg, with and without i-Eloop, respectively.

Along with official fuel economy numbers, Mazda has announced pricing for its new compact, and the base i SV model with a six-speed manual transmission will start at $16,945 (*not including $795 for destination).

Several other models will be offered at the following prices. To note, "i" models use the 2.0-liter engine, while "s" trims use the larger 2.5-liter mill. Several packages are offered along the way, including a Touring Technology Package ($1,600) for i Touring models featuring the company's new seven-inch touchscreen infotainment system, upgraded Bose sound system, and a host of other goodies found within both of those features. For s Grand Touring models with the 2.5-liter engine, the i-Eloop regenerative braking system can be had for $1,600, including high-beam light control, lane departure warning and Mazda's Smart City Brake Support system. All in, a loaded Mazda3 hatchback will set you back $28,890, including destination.

It may be one of the most fuel-efficient cars in the class, but it's also now one of the most expensive. Still, considering how great the Mazda3 is to drive, we'd be more inclined to spend our enthusiast dollars on something like this than a comparably priced Ford Focus. Scroll down for the full details in Mazda's press release.

"The compact car segment is one that is competitively cutthroat, meaning there is little room for error when launching an all-new vehicle like the 2014 Mazda3," said Jim O'Sullivan, president and CEO, MNAO. "But our best-selling vehicle has only gotten better, winning over the industry critics that were recently offered a behind-the-wheel experience. Yet our most important judges remain the consumers and I am confident that our third-generation Mazda3 will not disappoint."

Moving up to the i Sport adds illuminated steering wheel controls, a 60/40-split fold-flat rear seat, Bluetooth® hands-free phone and audio connectivity, cruise control, a trip computer, a CD player, map lights, body-colored side mirrors and a tachometer. Sport models are available in either sedan or new-for-2014 five-door form and can be fitted with either transmission. The Mazda3 i Sport four-door with SKYACTIV-MT starts at $18,445 MSRP while an identically equipped five-door starts at $18,945 MSRP. Optioning the SKYACTIV-Drive six-speed automatic adds $1,050 for either sedan or five-door model.

Mid-level i Touring models feature all-new 16-inch aluminum alloy wheels, heated body-color folding outside mirrors with turn signal indicators, bright beltline trim, a rear seat folding armrest with cup holders, the Mazda Advanced Keyless Entry & Start system, Touring-specific cloth-trimmed sport seats as well as a leather-wrapped brake handle, shift knob and three-spoke steering wheel with contrast stitching. A body-color rear deck lip spoiler becomes standard on sedans while a rear roof spoiler is fitted onto five-door models. A Blind Spot Monitoring (BSM) system with Rear Cross Traffic Alert (RCTA) also is standard on all i Touring models. The Mazda3 i Touring four-door with SKYACTIV-MT starts at $19,595 MSRP while the five-door version adds $500 to a starting price of $20,095 MSRP. Like i Sport models, the automatic transmission can be added for $1,050, regardless of how many doors are optioned.

The i Grand Touring starts at $22,745 MSRP for the sedan and $23,245 MSRP for the five-door when featuring a SKYACTIV-MT six-speed manual transmission. The SKYACTIV-Drive six-speed automatic adds $1,050 to $23,795 MSRP and $24,295 MSRP, respectively. All i Grand Touring models feature the equipment of an i Touring with SKYACTIV-Drive as well as a six-way power-adjustable driver's seat with manual lumbar adjustment, leatherette seats and door panel inserts, variable heated front seats and a moonroof with a one-touch open function.

Fuel economy for all five-door models featuring the SKYACTIV-G 2.0-liter engine is rated by the U.S. Environmental Protection Agency (EPA) at 29 city/40 highway/33 combined mpg with a manual transmission and 30 city/40 highway/33 combined mpg when equipped with an automatic. Sedan models are estimated[3] to offer 29 city/41 highway mpg (6MT) and 30 city/41 highway mpg (6AT).

The more powerful SKYACTIV-G 2.5-liter gasoline engine is reserved for s models, which are available only in Touring and Grand Touring trim levels. At launch, the SKYACTIV-Drive six-speed automatic transmission will be the only transmission option available, but the SKYACTIV-MT six-speed manual is confirmed to be offered at a later date. Estimated fuel economy for the s-designated sedans is 28 city/39 highway mpg or 29 city/40 highway mpg when equipped with i-ELOOP. Five-doors are estimated to achieve 28 city/37 highway mpg or 29 city/39 highway mpg with i-ELOOP. All i and s trims deliver their fuel economies equipped with standard temporary spare tire.

A Sport mode button also is standard and offers a more direct response in terms of accelerator feel and a heightened sense of linearity. All Mazda3 vehicles equipped with a six-speed automatic transmission feature a manual shift option but the Sport mode feature (s models only) adjusts the shift mapping – and to a lesser extent the throttle response – to better match more engaging driving conditions, such as twisty roads. The transmission will hold gears longer and not upshift or downshift as much while manually shifting when driving through turns.

The top-of-the-food-chain s Grand Touring features all the equipment of the s Touring with Technology Package as well as auto on/off headlights, bi-xenon headlights with auto leveling, a pivoting Adaptive Front-lighting System (AFS), rain-sensing windshield wipers, an auto dimming rearview mirror, perforated leather-trimmed seats and a moonroof with a one-touch open function. The s Grand Touring sedan starts at $25,995 MSRP and the five-door at $26,495 MSRP.

SCBS is an added safety component designed to assist a driver in reducing the extent of front collisions when traveling at speeds between 2 and 19 miles per hour. When the imbedded laser sensor detects an obtrusive object ahead of the vehicle and the system calculates there may be a high risk for collision, the brake pedal travel is reduced in order to hasten braking. Should the driver fail to perform an avoidance maneuver, the SCBS system will activate an automatic braking function. While the system will not eliminate accidents, its intent is to minimize them and reduce the severity of an impact.

All 2014 Mazda3 vehicles are available with a choice of eight colors: Jet Black, Soul Red, Blue Reflex, Liquid Silver, Meteor Gray, Snowflake White Pearl and the two all-new Mazda shades of Deep Crystal Blue and Titanium Flash. A choice of Black or Sand cloth seats as well as Black or Almond leather seats is available based on trim level. Leatherette-trimmed seats are offered only in Black.

[2] SKYACTIV is a registered trademark of Mazda Motor Corporation (MC).

[3] These figures are only estimates as provided by the manufacturer and not yet confirmed by the EPA. This particular model/trim has yet to be tested by a government agency.