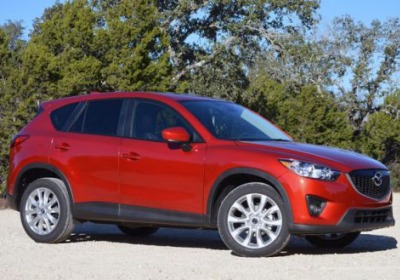 Back in October, we compared the relative merits of two new and very good small crossovers: the 2013 Ford Escape and 2013 Mazda CX-5. The CX-5 we tested then had Mazda's 2.0-liter Skyactiv-G engine under its hood, and it managed to just edge out the EcoBoosted Ford despite being down by some 23 horsepower and 34 pound-feet of torque. Had it been available, the 2.5-liter Skyactiv engine that we recently had the opportunity to try out in the 2014 Mazda CX-5, it may have made that comparison even easier to call in the Japanese CUV's favor.

Clearly, if you're in the market for a reasonably sized crossover, the CX-5 should, at the very least, be on your test-drive list. The new engine offering will let buyers opt for a stronger powerplant, with 184 hp and 185 lb-ft on tap. On our second day in Austin's Hill Country – the first was spent quick-spinning the 2014 Mazda6 i Sport, you'll recall – we covered a couple of hundred miles and put the new CX-5 through its paces; here's what we turned up.