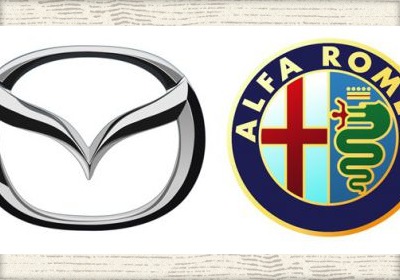 Although a little bit later than expected, Mazda and Fiat have signed a final agreement that will bring a next-generation MX-5 Miata to the Japanese automaker and a new roadster to Alfa Romeo. When the proposed arrangement was announced back in May, the two automakers had hoped to seal the deal last year, but it doesn't appear that the production timeline for these cars has slipped any, with both expected to start rolling off assembly lines in 2015.

Other than a shared chassis with a rear-wheel-drive layout, it sounds like the two cars are still planned to be distinct in their own ways from their styling right down to their engines. Mazda will produce both cars at a plant in Hiroshima, Japan, but it isn't clear what role each automaker will play in the cars' developmental process. The big question, of course, is what clever portmanteau name we can come up with, like Toyobaru. Mazda Romeo is the easy choice, but Alfazda might roll off the tongue a little better.

Scroll down for a brief press release from both automakers.

Further to the joint announcement of May 23, 2012, Mazda Motor Corporation (Mazda) and Fiat Group Automobiles S.p.A. (Fiat) announced today the signing of the Final Agreement which will see Mazda produce an open-top two-seater sports car for Fiat's Alfa Romeo brand at its Hiroshima, Japan, plant starting from 2015.

The new Alfa Romeo roadster will be developed for the global market, and will be based on the architecture of the next generation Mazda MX-5. The agreement foresees for both Mazda and Fiat to develop two differentiated, distinctly styled, iconic and brand-specific roadsters featuring rear-wheel drive. The Mazda and Alfa Romeo variants will each be powered by specific proprietary engines unique to each brand.

Through this contractual agreement, Mazda aims to enhance development and production efficiency and revitalize enthusiasm for open-top two-seater sports cars around the world. For Fiat, this collaboration will permit the company to deliver a modern interpretation of the classic Alfa Romeo roadster utilizing the latest technical solutions, helping Alfa Romeo to achieve its stated goals by 2016.