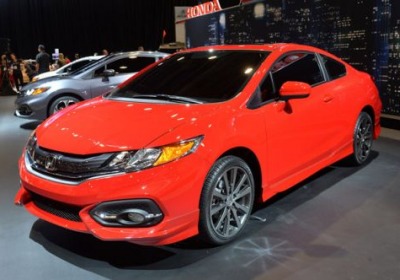 For the third consecutive model year, Honda has given its Civic lineup some substantial improvements, and with the 2014 Civic Coupe and Sedan going on sale this week, the automaker has released pricing and fuel economy numbers for its gas and non-Si models. Honda has not released any images of the 2014 Civic Sedan yet, but we got our first look at the updated Coupe last month at SEMA.

Aside from styling changes introduced on the 2013 Sedan being carried over to the 2014 Coupe, the biggest update to all 2014 Civics might be the addition of the continuously variable transmission (CVT). Fuel economy figures carry over for cars with the manual transmission, but models swapping the previous five-speed automatic for the new CVT are seeing a boost in city fuel economy by 2 mpg helping the Civic max out at 31 mpg city for the fuel-miser HF trim level.

Still no word when Honda will drop more info on the Civic Si, Hybrid and CNG models, but the full press release for the LX, EX and HF models is posted below.

Extensive fresh and dynamic exterior styling updates on the Civic Coupe and premium interior refinements to all models further enhance the Civic aesthetic appeal. New available features on the 2014 Civic include the 7-inch capacitive touch-screen Display Audio, LaneWatch™ blind spot monitor and Smart Entry with Push Button start. The 2014 Civic also marks the introduction of the HondaLink™ Next Generation connected-car technology. HondaLink™ is an application-based platform that allows a seamless integration between a user's smartphone and the car, providing access to online and cloud-based content and information.

An all-new CVT is available on the gasoline only powered Coupe and Sedan. The CVT enhances responsiveness by providing quicker and smoother acceleration and due to its wider ratio range and reduced internal friction, the CVT helped the LX Coupe and LX and EX Sedans to an improvement of 2 mpg city and 1 mpg combined for EPA fuel economy ratings of 30/39/33 city/highway/combined2.

The Civic Coupe is available in LX and EX trims with a 5-speed manual transmission or the new CVT and EX-L and EX-L Navi versions with CVT. The Civic Sedan comes in LX 5-speed manual or CVT and EX, EX-L and EX-L Navi with CVT. A Civic Sedan HF with CVT is also available. View, build and price at 2014 Honda Civic at automobiles.honda.com/civic.
For More Information
Consumer information is available at automobiles.honda.com/civic. To join the Civic community on Facebook, visit https://www.facebook.com/Honda/Civic.

1MSRP (Manufacturer's Suggested Retail Price) excluding tax, license, registration, $790 destination charge and options. Dealer prices may vary.
2Based on 2014 EPA mileage ratings. Use for comparison purposes only. Your actual mileage will vary depending driving conditions, how the vehicle is driven and maintained, battery pack age/condition and other factors.