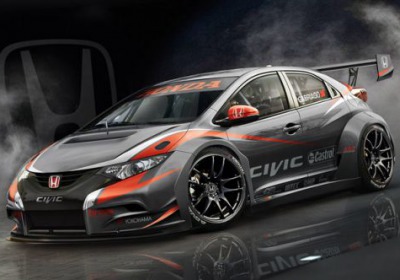 If you thought the Honda Civic Type R prototype we drove in Japan looked cool, and that the Civic Tourer that Honda will race in the British Touring Car Championship next year looks even cooler, just take a look at this.

Possibly the ultimate race-spec Civic, this is the car Honda will field next year in the World Touring Car Championship. Like the Type R prototype (but unlike the BTCC-spec wagon) the WTCC challenger takes the form of Honda's latest Euro-spec Civic five-door hatchback.

It's the car with which Honda intends to defend its title and capture the driver's title in next year's championship. It'll face a tough challenge from the new Citroën team headlined by Sebastien Loeb in the new C-Elysee, not to mention the rest of the grid. Fortunately, Honda is entering a whole mess of these Civics in the series, with former champion Gabriele Tarquini and former F1 driver Tiago Monteiro driving the works entries (hence the mixed "Gabriago" tag on the window) and another pair to be entered by privateer teams.

Honda has released the first visual of its 2014 World Touring Car Championship challenger reflecting the all new technical regulations for the FIA WTCC which will come into force for 2014.

Two works cars will be run by JAS Motorsport for Gabriele Tarquini and Tiago Monteiro with further Civics to be entered by private outfits Zengo Motorsport and Proteam Racing for Hungary's Norbert Michelisz and Moroccan Mehdi Bennani respectively.