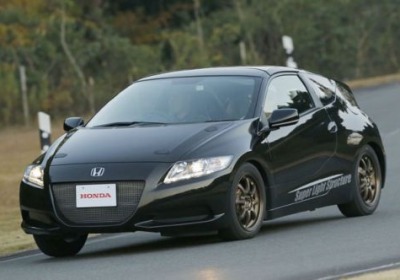 When Honda rolled out the CR-Z a few years ago, it hoped to bridge the gap between those who would save the planet and those who would rather burn all of its resources in a glorious cloud of tire smoke. But enthusiasts recalling the CRX of 1980s vintage balked, imploring Honda to ditch the heavy battery packs and electric motors in favor of a lighter-weight, more conventional powertrain. At this point it seems less likely that Honda would do so at one end of the market than Porsche would ditch the hybrid component of its 918 Spyder at the other. But that doesn't mean Honda isn't still cooking up ways to curb the CR-Z's weight. And it had just one such idea waiting for us when we visited its Japanese R&D center at Tochigi last week.

Nestled in between the JDM hatchbacks, powertrain test mules and new technology prototypes Honda rolled out for us sat the experimental CR-Z you see here. While it may look mostly like the hybrid sport-hatch you can pick up at your local dealer (albeit blacked out), nearly all of this prototype's bodywork has been completely replaced, as have its basic underpinnings, with carbon-fiber reinforced plastic. The exotic material is usually reserved for high-end exotics, but like BMW is democratizing its use in the new i3, so too is Honda researching ways to implement the use of carbon fiber on a mass scale. This one-of-a-kind CR-Z prototype stands, for the time being, as the embodiment of that effort.