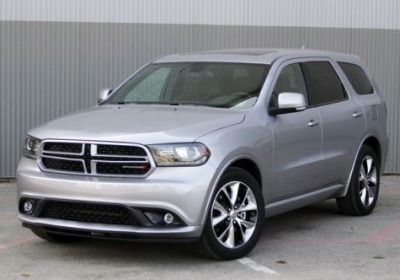 Say what you want about the Dodge Durango, but ever since it came on the scene in 1998, it has occupied its own niche in the SUV market – not too small, not too big, tough, able, not always the best on the road and not always the best off-road. If it were a football player, it would be a tight-end that can block and catch. If it were a hamburger – a double burger with cheese and bacon, but not the Whopper.

As part of a mid-cycle upgrade for what was already a very capable SUV that Chrysler introduced in 2011, and built on the same platform as the Mercedes GL-Class and Jeep Grand Cherokee, the 2014 Durango has gotten some refinements worth noting that have cleaned up its tailoring and toned up its body and powerplant. The result is an SUV that shows itself to be a very good value in a category full of sticker prices that can run away faster than a kid who's been told he has to take ballroom dancing lessons.

Chrysler executives showing us the new Durango made a special point to reiterate that the Dodge brand is not going away, as has been rumored after the company took the Ram and Viper – the cream of the brand – out from under the Dodge umbrella. Turns out Dodge has been the brand attracting the most young people (who knew?) and has a younger average age buyer than Honda. The Dodge brand historically has also attracted buyers who aren't exactly Phi-Beta Cappa, which some companies worry about. Chrysler not so much. Dodge buyers tend to be more the working, high-school-educated, community-college-educated backbone of the work force in America. If they keep coming to Dodge, the Durango is a pretty good piece of hardware to save up for.