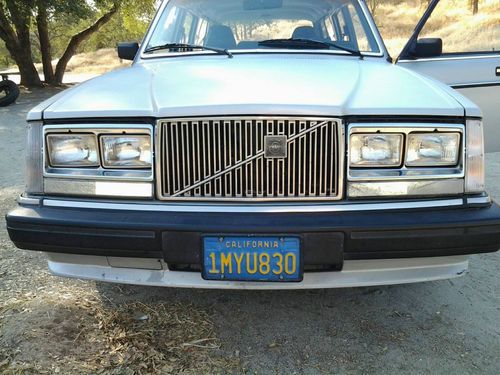 Condition: UsedA vehicle is considered used if it has been registered and issued a title. Used vehicles have had at least one previous owner. The condition of the exterior, interior and engine can vary depending on the vehicle's history. See the seller's listing for full details and description of any imperfections.Seller Notes:"Needs throw out bearing replaced, Drive shaft makes clicking sound when the vehicle comes to a stop, PS needs to be bolted but is in the engine bay held down by tie straps, Driver's side tail light broken, Seat warmers are not functioning, 2 chips on the windshield, Drivers side window rolls up and down but is slightly off track, passengers side window rolls down but will not roll up, back windows roll up and down but window behind drivers side works intermittently from the drivers side window control panel, 5th door needs shocks replaced in order for the door to remain up without the use of a stick, drivers side seat has about 3 tears on the butt rest, AC needs freon added, heater works but every now and then it sounds as if it is on low and last, their are some missing trim on the back - right side bumper. Please note that this vehicle was involved in a super lite accident causing the tail light to crack and slightly damaging the body although it is not noticeable on the pictures."

Up for auction is my Volvo Station wagon.
This vehicle has never let me down and currently my daily driver.
5 speed manual with the button for 5th gear.
Runs great!
It does have some issues though..
(PLEASE SEE THE SELLER'S NOTES FOR FULL DETAILS)
The biggest being the throw out bearing. It recently went bad, so now when you press the clutch to change gears, the car will vibrate.
Another thing to note is that, just recently as well, the drive shaft makes a clicking noise when you come to a complete stop. It may be related to the throw out bearing but I am no mechanic to tell you if it is or not. Other than that, it has been and still is a reliable vehicle. I use it everyday to get to work and back and roughly put in 30 miles a day. Although engine idles great, it is due for a complete tuneup. Will need a new set of tires but the tires that are on now  will due for the meantime. This Volvo gets approximately 25 miles to the gallon and, to this day, has never leaked a drop of oil. Volvo passed smog, I believe in January 2012, with flying colors!
The 1st owner, although I have no receipts to back it up, told me he had the motor mounts and timing replaced a few years back before selling the vehicle to me in December of 2011.
He also had the vehicle painted gray, silver being the original color.
Everything on the dash works including the clock and still has the original drivers and passengers door plastic rack for papers etc. Passengers rack is a little cracked but in good condition.
I personally give the engine a 9, paint job an 7, interior an 8 and the exterior a 8 on a scale of 1 - 10, 10 being great.
This vehicle needs somebody that will care for her as she is not ready to go to the junkyard.
Please note that I will still be driving this vehicle on a daily basis so do expect the mileage to be a little higher than what it shows on the picture. If the reserve price is meet or you decide to Buy It Now, the Volvo will no longer be driven and will stay on my driveway until pick up day.
Thank you so much for your interest and happy bidding!

Taking into account the facts that Volvo is now owned by China's Geely and how poorly the European automotive market has been recently, we would have definitely understood if Volvo moved production of its products out of its home market. And yet, the automaker has confirmed that it will be investing billions of dollars into new platforms and engines that will be made in Sweden. On a global scale, Volvo is making roughly $11 billion of investments, and close to half of that is being earmarked for Sweden for plant expansion and upgrades.
The new Scalable Product Architecture (SPA) platform will be the used as the basis for most future Volvo products starting with the next-generation XC90 that will be debuting at the end of 2014. SPA will be used to make up two-thirds of Volvo's sales, and gives Volvo a quicker and easier break from Ford-derived platforms. As for the Volvo Engine Architecture (VEA) family of engines, there are really no details about this mill except that it will be a four-cylinder that is more fuel efficient than current engines.
Scroll down for the Volvo press release.