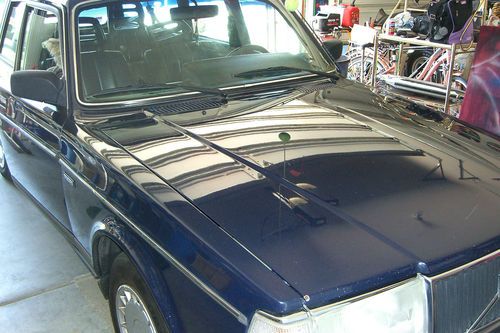 Condition: UsedA vehicle is considered used if it has been registered and issued a title. Used vehicles have had at least one previous owner. The condition of the exterior, interior and engine can vary depending on the vehicle's history. See the seller's listing for full details and description of any imperfections.Seller Notes:"DRIVERS SEAT HEAD REST IS PARTICALLY BROKEN, A/C BELT IS MISSING."

The debate about what direction to take perennially struggling Volvo has been raging for years. Should the Swedish marque go upscale and try to chase other European luxury brands, or should it stick to its safety-minded knitting? Should it adopt flashy new styling and a more overt performance bent, or keep it Scandinavian clean and responsible? Chinese parent brand Geely apparently has designs on making Volvo a full-fledged BMW rival - particularly in its homeland - including pushing for a range-topping 7 Series competitor. However, Volvo execs have been repeatedly pushing back on the idea. In fact, it's understood that this philosophical crisis contributed mightily to the high-profile departure of Stefan Jacoby, the company's CEO until the middle of 2012 (Jacoby has since rebounded to head international operations for General Motors).
There doesn't seem like any middle path in this debate, but that apparently isn't going to stop Volvo from trying. According to a sprawling Reuters report, Volvo will placate Geely chairman Li Shufu with a stretched and lux'd up version of the next S80. Yet Li still isn't completely satisfied, and he's said to be pushing for "a plusher and bigger model he calls the S100" to rival cars like the Audi A8. For the moment, it is not clear if the larger S80-based model will be a global offering, or just another one of China's many home-market, long-wheelbase specials.
The question of future Volvo styling is up for debate as well. According to Reuters, "Insiders say Li is a big fan of the new styling that design chief Thomas Ingenlath has brought to Volvo" (The latest example, the Concept Coupe from this week's Frankfurt Motor Show, is shown above.) Yet there are those who worry whether the company's new styling strategy is showy enough to appeal to China's wealthy. Chairman Li would still like to see a range-topping sedan for "show-off people," but Volvo's management doesn't want to go down that road. Clearly, this won't be the last we hear about the company's existential boardroom battles.

In addition to revamping its entire 2014 lineup, Volvo has already promised us that we'll be getting the V60 wagon early next year, but now the Swedish automaker has confirmed that sexy wagon will go on sale in January. If that's not good enough for you diehard station wagon models, there's even better news: An available R-Design model will be the "fastest and most powerful wagon in Volvo history."
The V60 R-Design will have a turbocharged inline six-cylinder engine under the hood producing 325 horsepower and 354 pound-feet of torque. Other engines available in the wagon will include the company's well-regarded turbo inline-five along with a new turbo inline-four wearing the Drive-E name. Volvo says Drive-E can "offer the opportunity" to add electrification, but there's no word as to whether or not the US will receive a V60 plug-in model. Also not yet released are fuel economy, vehicle specs and pricing. More information about the V60 and its powertrains are available in the official press release posted below.