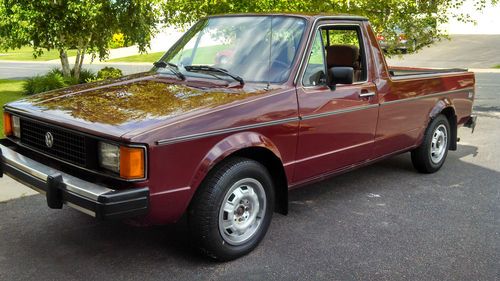 RARE ! !  1-OWNER ! !  who was born in 1930 ! ! !  Original title!  Up for Auction is this Very Clean, 1983 VW Rabbit LX Caddy pick-up.  This little rig runs-n-drives GREAT! !    Fly in & Drive home! !   I hope the pictures due this VW justice.  It does have some rust in misc. places . . this is a Minnesota original truck.   4cyl gas, 5-speed manual tranny.  You are welcome to come and inspect the VW PRIOR to bidding. Please ask ALL Questions PRIOR to bidding. No questions regarding condition will be anwsered Post auction.  The VW is located in Prior Lake, MN.  It will be sold AS-IS,  although for 30 years old it does run Great!  Please have your funds in order PRIOR to bidding.  Buyer is responsible for all shipping costs and arrangements.  Payment in FULL is due 48 hours of end of auction.  CASH or Bank wire ONLY.  Thanks for looking and Good Luck in the Auction! !