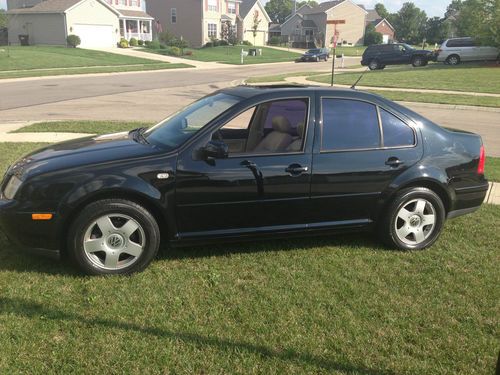 Condition: UsedA vehicle is considered used if it has been registered and issued a title. Used vehicles have had at least one previous owner. The condition of the exterior, interior and engine can vary depending on the vehicle's history. See the seller's listing for full details and description of any imperfections.Seller Notes:"Scratches on hood, faded paint on roof, noise coming from suspension."

You are bidding on a 2001 VW Jetta GLS Sedan with 155,XXX miles in good shape.  The only cosmetic defects are a faded roof and and scratches on the hood(see photos).  The only reason we are selling this vehicle is because my wife got another vehicle for her daily driver.  Vehicle runs great as is with no known mechanical defects in the drive-train.  HOWEVER, there is a noise coming from the suspension - sounds like something minor such as a spring or bushing.  Also, both are entirely functional, but brakes (normal wear and tear) and some exhaust (exhaust leak - NOT NEAR ENGINE) work will likely need performed in the near future. Scheduled maintenance has been tended to, the alternator has been replaced recently, and tires still have roughly 60% tread remaining.  All in all, vehicle needs a little TLC and will be a great vehicle for the next owner.

Feel free to contact me with any questions.
HAPPY BIDDING!!!