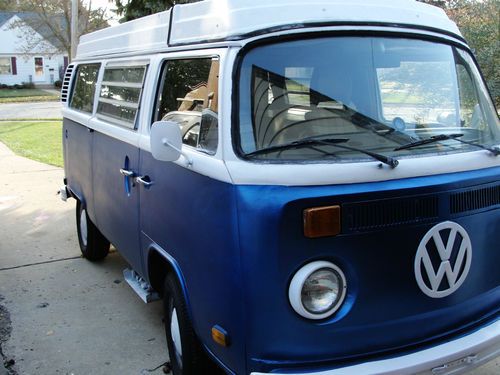 Volkswagen Westfalia is the classic camperbus!  I purchased the bus from a mechanic in Wisconsin in 2007.  The motor/ transmission are in great shape.  Bus starts just fine.  Blue/ white exterior, recently painted with rust spots buffed out and patched.  Interior was redone with new shag carpet and paneling.  The tires are good, the brakes are newer and work well, alternator and spark plugs recently replaced.  This is a fun vehicle my  family and I would take for trips and drives around town.  I am selling because I am moving across the country and cannot take it with us.  If you want a bus that you can drive right now, this is it.  Only a few minor fixes needed as listed in the next paragraph:

There is some rust where the footstep is on the driver and passenger side doors, but it is minor.  The paint job is good, but not professional.  The camper top tarp is intact and useable with two small holes in the canvas.  A few small spots on the paneling (on kitchenette) have worn off and the veneer on the table top is starting to curl up.  All of these are easily fixed, I just dont have time.  Third gear can be fussy at times shifting into it.  The white top gets dirty and needs to be scrubbed.