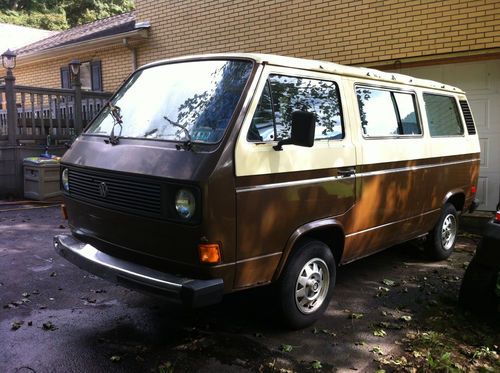 Condition: UsedA vehicle is considered used if it has been registered and issued a title. Used vehicles have had at least one previous owner. The condition of the exterior, interior and engine can vary depending on the vehicle's history. See the seller's listing for full details and description of any imperfections.Seller Notes:"This van has been parked for over ten years and we all know what can happen when a vehicle hasn't been driven for a while. I am listing as not running however the engine cranks freely and will run with a shot of starting fluid. The windshield is broken and there is a dent directly under the damaged glass. The brakes, clutch, and electrical system are functional. Interior looks nice except for a tear in the back seat.There is minimal rust on borrom of driver's side door and a dent on the sliding door.I don't know alot about VWs this is a first for me. The reserve is low this van could be fixed or used for parts. I do have a clear title. The sticker on the window and vents indicates that the van has air."