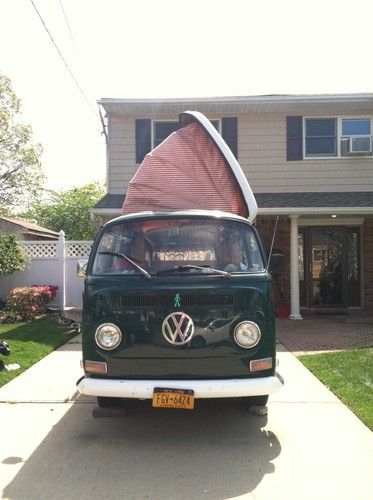 For sale is my 1970 VW Bus with a Dormobile Camper Conversion. Runs and idles great. Having problems with a clutch plate or linkage.

It has about 86,500 miles, however there are only about 2000 miles on the new engine and transmission. The brakes are new, the curtains are original. The front is a three seat bench with storage underneath, as well as a footrest/shelf under the dash for comfort and storage.
The back has the standard z-bed pull out in yellow vinyl. There are two tall closets, as well as a side cabinet, a cabinet under the bed, as well as a storage bench with attached swivel table. There is also a kitchenette with a mini fridge, sink and two burner stove, but it is from another year. I have personally not used it (I removed it for more living space) but it still is included.
The Dormobile conversion includes two pull out cots, which I do not have the canvas for. One has been removed for more headroom, and will need to be reattached. There is also an additional cot that can be attached over the front seats.
Included with the bus is a yellow framed Westfalia Side Tent in incredible condition. Also included are new seals for the doors and windows.
There is one major ding in the front, in which the paint cracked and has begun to rust.
This bus has been lovingly driven and kept. I am selling it because I am moving and I will not be able to keep it where I am going. I have invested alot of time, money and love into this bus, and have kept exceptional care of it.