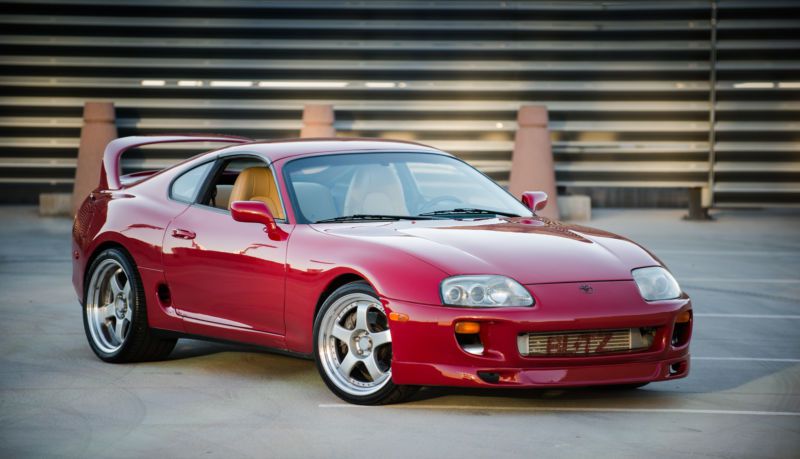 BUILT ORIGINAL 1995 TOYOTA SUPRA 6-SPEED TURBO
Here is your chance to own a SUPER CLEAN and BEAUTIFULLY modified Toyota Supra and SAVE yourself THOUSANDS!! This
Supra is built with the best parts for a truly adrenaline rush ride of a lifetime with super LOW ORIGINAL MILES.
ALL Upgrades have less than 5K miles, still drives like a new Supra, Super smooth, Super powerful, and Super Fun.
DON'T miss your chance on owning such a well built and maintained car. A MUST SEE AND DRIVE!!! Supra comes with a
great list of modifications Modification list includes:
ITS T67 Turbo
HKS 264 Cams
AEM V2 ECU w/Flex Fuel
60mm Wastergate
FULL Fuel System Upgrade
BM Short Shifter Kit
1-Piece DriveShaft
3" Turbo Cat-Back Exhaust
AEM Wideband
AEM Digital Boost Gauge
RPS Carbon Clutch
HKS Drag Coilovers
1000cc Injectors
Twin Walbro pumps
-10an feed Braided Lines
Aeromotive Fuel Filter
Flex Fuel Sensor
5Bar Map Sensor
TRD Engine Mounts
Blitz Intercooler
Aluminum Radiator
Unorthodox Adjustable Cam Gears
Unorthodox Accessory Pulleys
NEW Factory Sprayed Paint Job (Less than 2 months old)
New upholsetered Seats
19' SSR Professor Wheels w/NEW Tires
and much more...
The Supra is currently street tuned on 91 octane making 540whp at lowest setting, easy capable of being tuned on
e85 to make 750+whp. Car is capble of more power if you want to push it and has everything you need to make this
Supra a Perfect daily driver or a track beast. Keep in mind the car currently is tuned PERFECTLY for daily driving
and runs super smooth with zero issues. No leaks, No smoke, and Never drag raced. Car was built for intention of
show quality and craftsmanship and the modifications and reliability speak for itself. Car has never been involved
in any accidents and has a perfect and clean carfax