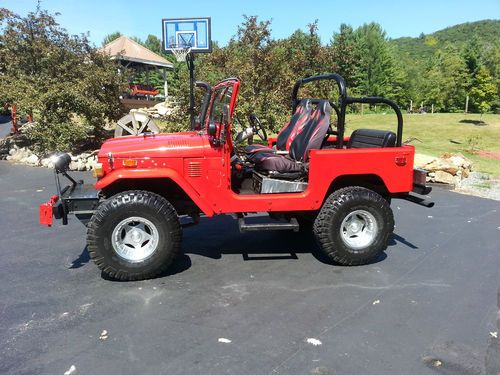 Condition: UsedA vehicle is considered used if it has been registered and issued a title. Used vehicles have had at least one previous owner. The condition of the exterior, interior and engine can vary depending on the vehicle's history. See the seller's listing for full details and description of any imperfections.Seller Notes:"passenger side door jam has a couple hair line cracks (pictured). this vehicle has normal ware as to be expected from driving. Windshield wiper motor stopped working needs to be rebuilt. speedometer cable just broke. may need a water pump but works fine,has had a speratic noise since spring. This is not effecting anything,just wanted to mention it. Have hard top also but the inside metal work is poor,I have never used it. The tires are about 50 percent. when sitting the transmission will acquire a drip the size of a dime on the ground, other than that surprisingly no other leaks. The break return spring may need to be heavier because the break lights stay on periodically. other than being a choppie ride,it is fun and gets tons of thumbs up. ABSOLUTELY no smoke. shifts perfect.. drives great.. being a 1972.."

my email address for any questions is brycebradley69@gmail.com