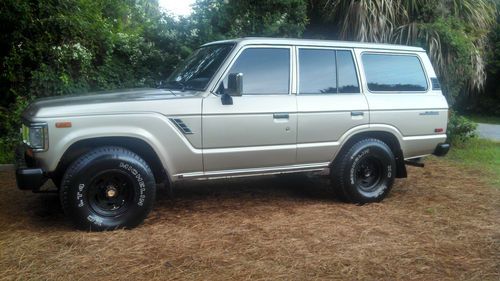 Up for auction is my 1989 Toyota Land Cruiser.  Very clean.  Gorgeous paint and interior. Kind of a light bronze paint with two tone tan/brown interior.    Both front and back seats are in very good shape as well as the carpet.  Newish tires.  114,000 miles.  Power windows and locks.  Tinted windows.  Tilt wheel.  Aftermarket cruise control.  If you've been looking for one of these for a while you know how hard it is to find one that has really been garaged and taken care of.  Just a beast of a 4 wheel drive.  No weird smells in the interior.  A folder of receipts comes with this.  Runs like a top.  Everything works all the way down to the digital clock, power side mirrors, and power antenna.  Comes with original tool kit. All gauges work correctly.  Runs straight down the road without any pulling to either side.  Master cylinder just reworked and brakes have been inspected and work perfect.  A/C blows cold.  Drive it anywhere. $16,500.   Email me for any questions or if you want a photo of something in particular.  This Cruiser is for sale locally so I reserve the right to end the auction early.  Good luck and happy bidding.  Dave