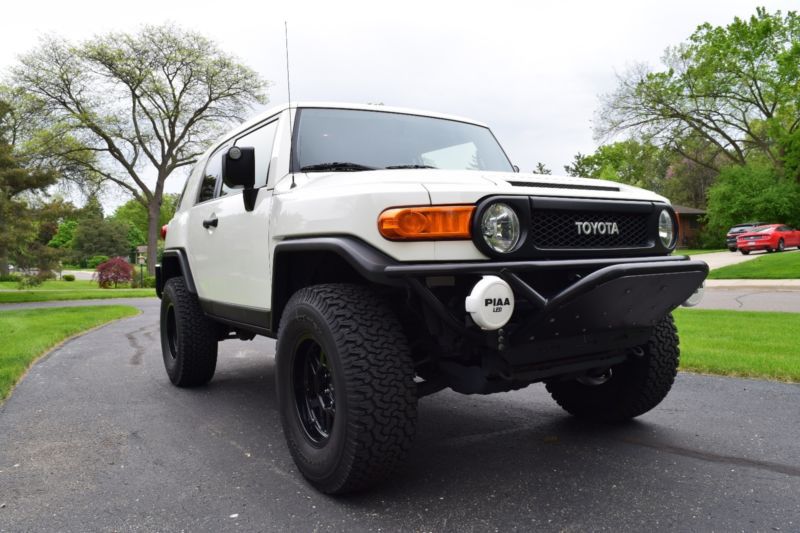 Just email me at: eleaseekkrassow@ukif.com .

2013 Toyota FJ Cruiser, white on black, 27,500 miles. Car is in fantastic condition, and has the following
upgrades, in addition to all avaiable dealer options (parking sensors, back up camera, dash display, dual armrests,
etc.) Extremely clean car with perfect Carfax, always maintained at Toyota dealer.
Dealer installed black leather, front and rear seats
Dealer installed heated front seats
Stock and all weather TRD floor and cargo mats
Icon stage 1 suspension with piggyback rear shocks
Stealth Custom Series 6 17' wheels
BFG ATs - 285s
LED markers on all corners
HID headlights
Metal Tech tube rear bumper
Metal Tech tube front bumper with bash plate
PIAA 570 LED fogs
All Pro pipe
Fully stripped and sound deadened by N2 Aero in Glendale, CA
Black door handles, mirrors, and grill
Full Toyota maintenance until 45k miles
The car has been my daily driver for 2 years, and handles very well on the street, comfortable and quiet. I've only
had it off road once, and it does what ever you ask of it. Its all all-around amazing truck, buyer will not be
disappointed.