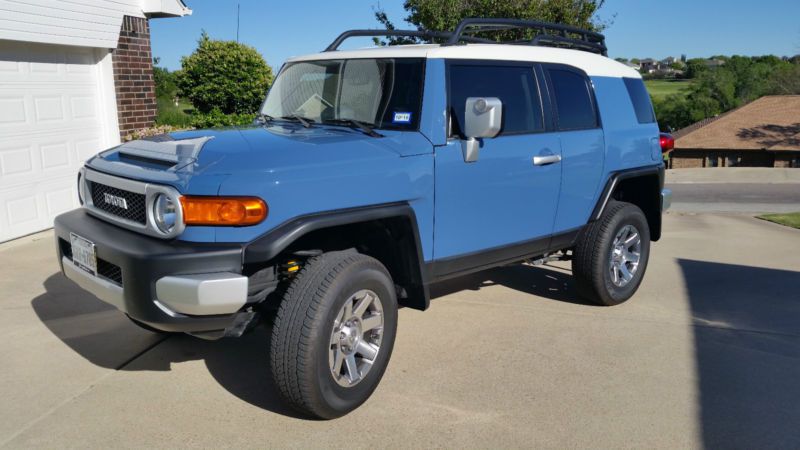 I am selling my Calvary Blue 2013 FJ Cruiser Auto, 4WD, with what was called earlier Upgrade Pkg #2 with Subwoofer,
Backup Sensor, AC Inverter, Keyless Entry, Dash CompassTemp/Incline Meters, Skid Control. Also offroad options
include 4WD with A-TRAC, Rear Locking Differential, and Trailer Hitch.
Calvary Blue appears to be a slightly rare color and is a more mild blue than the blue seen on earlier FJs.
Other options are Roof Rack, Satellite XM Radio, Rear tire cover, Rear Backup Camera, Garage opener, and auto-dim
mirror.
In Addition, I have installed a front ARB Lift Kit with 885 coils and struts, Rear Toytec RCC 2.0 Springs (aprox
3.0" Lift in front and 2.5" in the rear), Rear Bilsten Shocks, new Toyota Aluminum Wheels, New Tires (600 miles on
them), and a Toyota Alarm System. I also have a Toytec front diff drop kit which goes with it that you can install
later if you wish. The lift evens out the natural forward downward slope of the FJ.
Please consider these added options in your offer because the cost of these last eight options I installed was
$4000.
Purchase also includes the original 4 aluminum wheels and tires with approx. 19,000 miles on them. All these tires
are good.
I made sure the ride after lifting was smooth and soft similar to the original ride with more control. This is the
second FJ I have done this to. So it drives much better and rides very smooth.
It is ready for a future winch and front ARB bulbar etc. or you can leave it alone. It rides fine. The suspension
will handle a winch if you add it later without a change in the ride.
This is an Excellent Condition FJ Cruiser with only 19,762 miles, very low miles and it has been well taken care of
and garaged by myself. It is driven several times a week around town very lightly so the miles at purchase will be
slightly more.