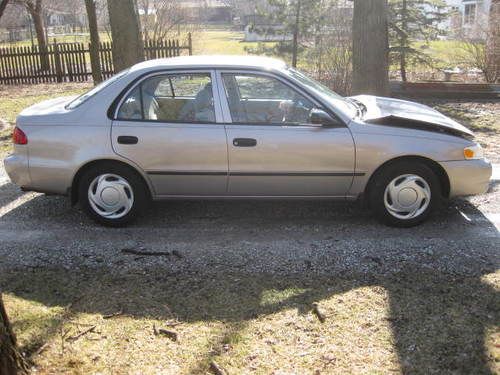 Up for sale is a 1999 Toyota Corolla tan in color, that has only 85,500 miles on it. Unfortunately the car was in a front end collision recently, and only had lialibility insurance.  It could be repaired, or used for parts.  This car has always been meticulously maintained mechanically, as was the interior and exterior. Has 4 brand new tires on it (about 5,000 miles on them). It still starts right up and drives, however it will have to be towed to your location as the radiator is damaged and it lost its coolant. Everything worked perfect before the accident. The title is clear, NOT a totaled title. I don't have the room to keep the car.  If you have any questions or would like more specific pictures please feel free to email me.  Car must be picked up 48 hrs. after auction ending.