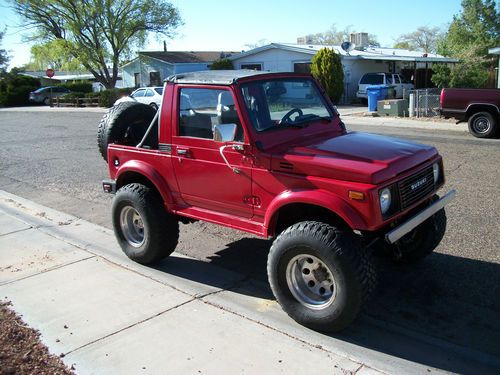 1987 JLX Suzuki Samurai 4x4 restored , SPOA lift done correctly with over the top steering , extended brake lines, and driveline spacers. Wheelbase extended 1.5" Tires are 33x 12.50 x 15 BF Goodrich MT radials ( if you are wanting a mud rig tell me at end of auction and i will swap them out for 33" super swampers with good tread ) they are on 15 x 10 aluminum wheels!

The JLX means it has fancy add ons such as a factory tach dash cluster , chrome bumper, and air conditioning, It also has a Suzuki VIP steering wheel which seems unique ( only one I have ever seen ).
I installed new racing seats which are light weight and comfortable ( I want a set for our Toyota now ).
I installed a new MP3 player , new 6.5" 4 way speakers, 8" truck boxes in back. New Halogen headlights with Halos , new sun visors from Indonesia, new washer bottle, new window laces ( no rattles ), new hood release cable, etc.
The engine was rebuilt with new rings , bearings, gaskets, etc. Good used carb sourced from Florida. Stainless rear view mirrors. Dodge 3/4 ton motor mounts. Electric fan on sensor - kicks on when temp hits halfway mark.New fuel pump , new belts, silicone vacc, hoses , new filters. Good clutch. Good shift 'sheets' excellent shift patterns with no slop!
Recent paint job - fire engine red , called ' candy apple' by supplier. Similar to Porsche 'guards'. Body was stripped, sanded, and painted. Rust free Arizona car! stainless entry guards emblazoned with ' gulf suzuki'.
Replaced master cylinder. This will be my last Samurai so you will get all the extra paint, parts, and coffee cans full of hardware with this car.
It drives very clean. The OTT steering and stock springs make it a big improvement. The motor was stamped AAAA and 1111 - perfect machining. I found out after the fact it did not need a rebuild, just new valve seals - but since I had the parts I did it anyhow. It is a great Sammy and turns every head it passes. The back seat could use recovering. I replaced the horn but it still does not blow ( will try to figure it out ),I think the heater hose was not clamped tight but it may be the heater core - I bypassed it for now. I have new heat control cables but have not installed them yet.Would make a great around town cruiser or other. If you want to go on the toughest trails I would suggest the 6.5 crawler gears and a rear locker. It is stock gears and open diffs for now. Otherwise you can put side kick gears in diffs or just cruise it around for fun.I was going to make a rear top bow for it but have not yet. You can get a stainless one on low range web site for $99 and get a full top on ebay for cheap.Please email me questins or call 928-640-0631 8am-9pm mountain time. We are gald to answer any and all questions. Please consider a test drive too. We are on beautiful Lake Powell in Northern Az.
ALSO: replaced door handles and window winders inside and out, Also put in a brite tread aluminum panel kit - see pictures !
Great little car for safari or family buggy and way more practical than a razor, raptor, rhino, etc!