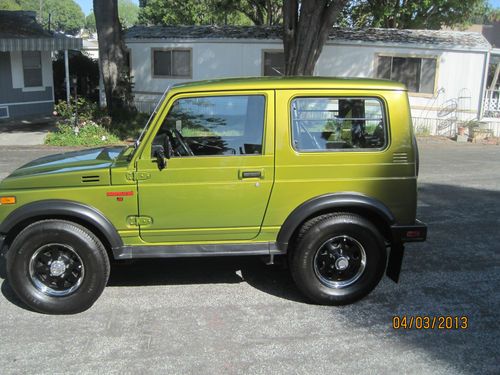 THIS SUZUKI HAS OVER $19,000 DOLLARS IN RECENT RECIEPTS,ALL BODY WORK AND PAINT DONE CORRECTLY, ENTIRE CAR INSIDE AND OUT PLUS INSIDE ENGINE COMPARTMENT AND UNDER COATING WAS DONE.THE ODOMETER READS 15,492 BUT IT HAS AT LEAST 115,492 ON THE TRUCK,A 1.3 LITER ENGINE WAS INSTALLED AND TRANY WITH 43,000 ORIGINAL MILES. NEW WATER PUMP, THERMOSTAT, TIMING BELT, ALL VACUM HOSES,AND ALL BELTS, NEW GAS SHOCKS, REAR SPRINGS,NEW MUFFLER AND CATALITIC CONVERTER, TAIL PIPE AND HANGERS,5 NEW TIRES, HAS AIR CONDITIONING,BUT NEEDS CHARGING,NOT SURE WHAT ELSE,COMPLETE NEW TROPICAL INTERIOR INCLUDING NEW DASH,NEW BRAKES FRONT AND REAR,THERE IS REALLY TOO MUCH TO LIST,PLEASE CALL THE OWNER AS HE DOES NOT HAVE A COMPUTER, HIS NAME IS CHUCK---714-421-3408 , AND HE WILL ANSWER ALL QUESTIONS AS MUCH AS HE CAN