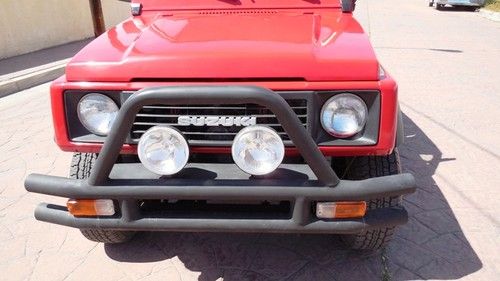 Condition: Used: A vehicle is considered used if it has been registered and issued a title. Used vehicles have had at least one previous owner. The condition of the exterior, interior and engine can vary depending on the vehicle's history. See the seller's listing for full details and description of any imperfections. ...
LOADED JX MODEL WITH A/C
1988 SUZUKI SAMURAI
RUST FREE CALIFORNIA TRUCK WITH LOW RESERVE
CARFAX GUARANTEED NO ACCIDENT, CLEAN TITLE
GORGEOUS RED SUZUKI SAMURAI 4X4 ,  A RUST FREE CLEAN TITLE CALIFORNIA TRUCK  , LOADED JX MODEL WITH A/C!
WOWWW   ANOTHER AMAZING, VERY RARE JX LOADED .
DEPENDABLE GAS SAVER 4X4 THAT PUTS $30,000 JEEPS TO SHAME!  CLIMBS ANYTHING AND IS NOT HEAVY TO USE LOTS OF GAS OR GET STUCK IN THE MUD.
PRIVATE SUZUKI REBUILDER SELLING ANOTHER AMAZING REBUILT WITH PRIDE AND JOY...
AS OF APR. 2013 WE STARTED WITH A VERY NICE CARFAX GUARANTEED (LESS THAN A 1000 MILES ON ALL THE REBUILT), SAMURAI AND HAD IT ALL REDONE WHERE IT NEEDED.
AS OF APR. 2013 COMPLETE MOTOR OUT REBUILT  ALL RINGS,NEW BEARINGS, ROD BEARINGS, COMPLETE GASKET SET, SEALS, COMPLETE NEW SERVICES AND TUNE UP AND BELTS AND HOSES AND FILTERS $1580
AS OF APR., 2013 COMPLETE NEW RADIATOR SERVICE, WATER PUMP, THERMOSTATE , ETC. $270
AS OF APR., 2013 COMPLETE CARBURATOR REBUILT AND FUEL SYSTEM TESTING $380
AS OF APR., 2012 COMPETE SERVICES, DIFFERENTIALS,REBUILT TRANSMISSION AND SERVICED TRANSFER CASE, CLUTCH, FLUIDS       $875
ALL NEW BRAKES  $880
ALL ELECTRICAL VERIFIED, CHECKED ALL GAGES AND FAN AND HEATER WORKS LIKE NEW $475
COMPLETE NEW 3 STAGE PAINT  $1470
COMPLETE NEW CUSTOM  INTERIOR INCLUDING CEILING AND FULL CARPETING AND DOOR PANELS $1650
NEW PROFESSIONALLY INSTALLED FOG LITES $450
A PROFESSIONAL RESTORE WITH LOTS OF $$$ INVESTED IN RESTORATION COSTS ALONE!
FOR SALE LOCALLY AT $6995                           BUY IT NOW IS $6995
SELLER RESERVES THE RIGHT TO SELL LOCALLY AND END THE AUCTION AT ANY TIME, CALL 858 222 2674 WITH ANY QUESTIONS
BUYER TO PERFORM ALL INSPECTIONS AND ASK ALL QUESTIONS BEFORE BIDDING. IF YOU ARE NOT READY TO MAKE A DEPOSIT WITHIN "ONE BUSINESS DAY" AND PICK UP THE VEHICLE IN 7 DAYS OF THE END OF THE AUCTION, PLEASE DO NOT BID.
IF YOU NEED TO GET YOUR WIFE'S PERMISSION  DO SO BEFORE BIDDING!.
IF YOU HAVE LESS THAN 10 POSITIVE FEED BACKS OR LESS THAN 98% RATING , PLEASE CALL 858 222 2674 , BEFORE YOU BID OR YOUR BID WILL BE CANCELLED
PAYPAL DEPOSIT LIMIT IS $50    BALANCE MUST BE PAID FOR IN CASH IN PERSON OR BANK WIRE DEPOSIT TO WELLS FARGO BANK ONLY.