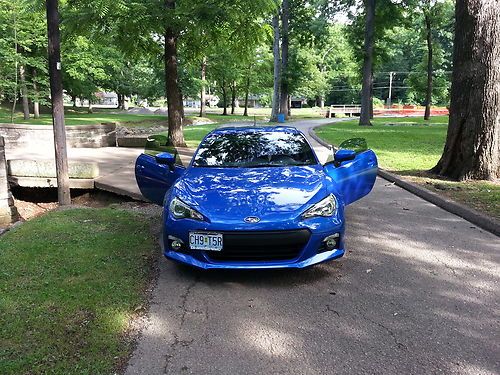 Condition: UsedA vehicle is considered used if it has been registered and issued a title. Used vehicles have had at least one previous owner. The condition of the exterior, interior and engine can vary depending on the vehicle's history. See the seller's listing for full details and description of any imperfections.Seller Notes:"Perfect condition,also has a 70,000 mile 10 gold plus Subaru warranty with car"

Amazing car; Subaru's only rear wheel drive coupe in years. Handling is great and won top pick on Car and Driver and many other awards for drivabillity and engineering. The only mods are jdm blue engine cover (seen in pictures) and K&N air filter. Has home link mirror with auto dim and will control up to 3 doors. this car is a fun car and I have all warranties that you could imagine on it (ding protection, Subaru Gold Plus 70,000 or 10 yrs, and laser etching on windows). Tires are the stock Michelen's and have plenty of tread life. Will work out delivery options if you are not able to pick up. If you have any questions about the car email me. .