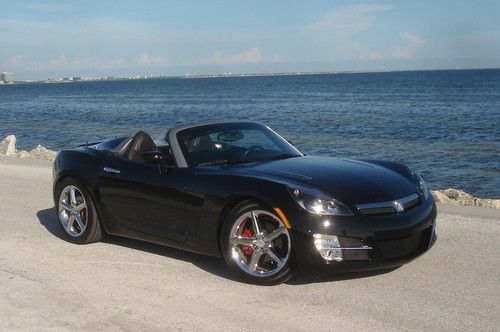 Up for sale is a 2007 Saturn Sky 2.4 that has been SUPERCHARGED. I am the original owner and it has been meticulously maintained and has had Mobil 1 in it since it's first oil change. It's a 5-speed car with power windows, leather seats, 6 disk Monsoon stereo with XM, A/C and has 28k miles on it and I have added many mods including the DDM works stage II supercharger and intercooler, coil cover, polished throttle body, cat-back Magna Flow exhaust, rear 're-bar' suspension brace, lowered 1.25", front crossbay brace, water temp and boost gauge in the A-pillar, wind deflector with Saturn logo, under body LED lighting wired to the interior lights for increased visibility getting in and out of the car at night, red LED gill lights, red LED under hood lighting and sequential tail lights. Whew, I think that's it. I also have a spare set of black RedLine headlights and a header that I haven't gotten around to installing yet.