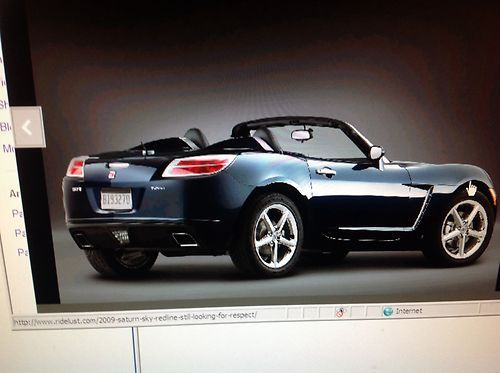 Condition: UsedA vehicle is considered used if it has been registered and issued a title. Used vehicles have had at least one previous owner. The condition of the exterior, interior and engine can vary depending on the vehicle's history. See the seller's listing for full details and description of any imperfections.Seller Notes:"The car is in very good condition. There is a small scratch on the rear driver side just above rear light. There is a quarter panel just behind the passenger front tire which is cracked along lower edge. Car runs like new and has upgraded custom exhaust, custom air intake with Fujita cold air intake, custom Wet Okole seat covers over leather seats. Very low miles. i am the only owner and ordered the car new from Saturn. All interested parties are welcome to come see the car. Very fast for a small car due to 260 hp turbo with additional approx. 20 HP do to upgrades."

2007 Saturn Sky Redline Turbo.
Original owner.
14,000 miles.
Upgraded custom exhaust, Fujita custom cold air intake, custom Wet Okole seat covers.
Runs like new. Just serviced 1month ago and with no mechanical or electrical issues.
All options offered in this car are included. I am basically asking the Kelley Blue Book value for this car.
2 issues with the car exterior are in the pictures: a small scratch on rear passenger side above rear light and a cracked undersurface quarter panel behind passenger front tire.
I also have an uninstalled front end bra for the car, custom uninstalled chrome door lock plungers, and a new clear plastic protection kit for front end.
Reasonable offers considered. Come see the car if you like.
No delivery unless arranged by buyer.
Clear title in my name.