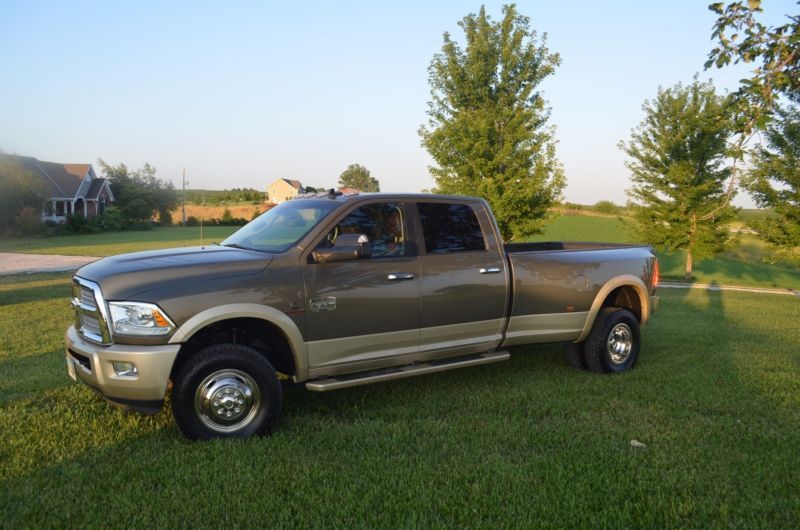 2014 Ram 3500 Laramie Longhorn
New tires all the way around.
Freshly serviced and all recalls complete.
Fully loaded, but does not have aluminum wheels or rain sensing wipers.
Has the much better Aisin transmission, I have had these in other trucks and they are bullet proof.
Starts runs and drives like new, or better, because it is already broke in.
15-17 MPG. Thats the true MPG, I don't hypermile, I drive 75 MPH. I have driven mostly empty, although I have
towed a few 12000 LB loads and it is nothing for this truck.
Built in brake controller - and exhuast brake. Factory dodge gooseneck ball set up.
Heated seats, steering wheel, mirrors and back glass.
Cooled seats

Ram 1500 to get V6 diesel engine later this year

Happy Valentine's Day, diesel lovers! Chrysler announced today that the Ram 1500 will offer a light-duty diesel engine when it goes into production this fall. Using the same turbocharged 3.0-liter EcoDiesel V6 recently introduced in the 2014 Jeep Grand Cherokee, the Ram 1500 is expected to get even better fuel economy than the current 2013 model's best-in-class 25 miles per gallon on the highway.
Power output has not been released for the Ram 1500 EcoDiesel, but in the Grand Cherokee, this engine produces 240 horsepower and 420 pound-feet of torque, and it will be paired with Chrysler's eight-speed automatic transmission. This has definitely been a busy and exciting year for the Ram division, bringing home major awards such as the 2013 North American Truck of the Year, 2013 Motor Trend Truck of the Year and 2013 Truck of Texas not to mention the recent announcement that the Ram HD models will offer a best-in-class towing capacity of 30,000 pounds - all of which is pointed out in the press release, below.