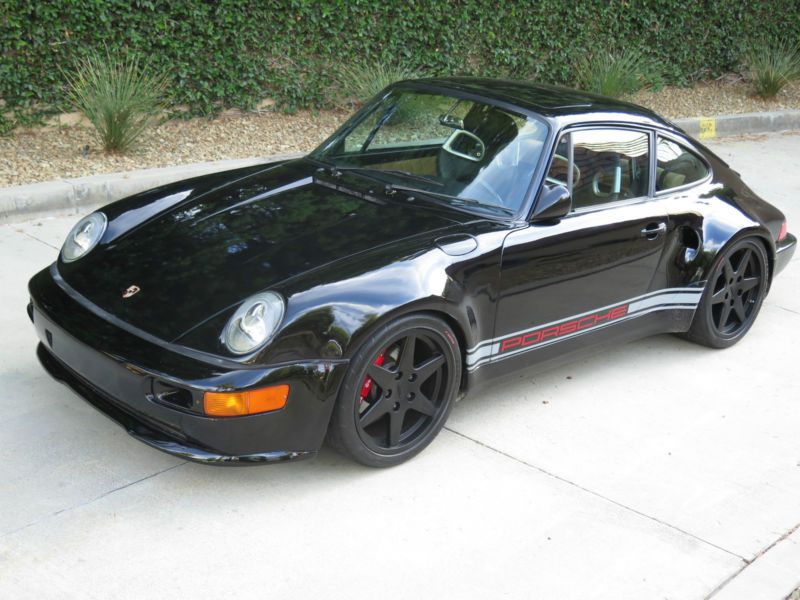 My 1990 Porsche C2 STINGER
It is a one of a kind car that has a unique look, stance and performance at an investment of over $ 100k.
Truly a one of a kind, and full of unique features:
It has steel 993 Turbo rear fenders and bodywork,
Custom Fiber front fenders,
Front body bumper and front splitter,
all parts sourced and imported from Germany,
new massive 9" and 11" by 18 inch wheels,
fitted with new Pirelli P Zero tires.
225/40/18 front,
265/35/18 rears.
Lowered with shorter sport springs
Special dampers for better control
Interior Features Factory GT3 Seats
5 piece high quality Custom roll cage with cross
and side/seat belt bracing
Fire extinguisher
Early Momo Steering
Factory early chrome rear view mirror
Carbon fiber outside mirrors and shifter knob
white faced gauges
and much more.
Mechanically, the 3.6 matching numbers Carrera engine,
has Wong chip,
upgraded airflow sensors and air filter system,
full custom cold extruded exhaust,
this engine makes a gentle, well mannered 285 useable BHP.
Docile and totally tractable for around town and daily driving, with light clutch with great feel, the kick in the
back power comes in at 5,500 RPM, all the way to 7,250 RPM which is limiter set,
can also be tuned for well over 300 BHP if desired.
Check out the engine running through the rev range,
absolute symphony of sound: