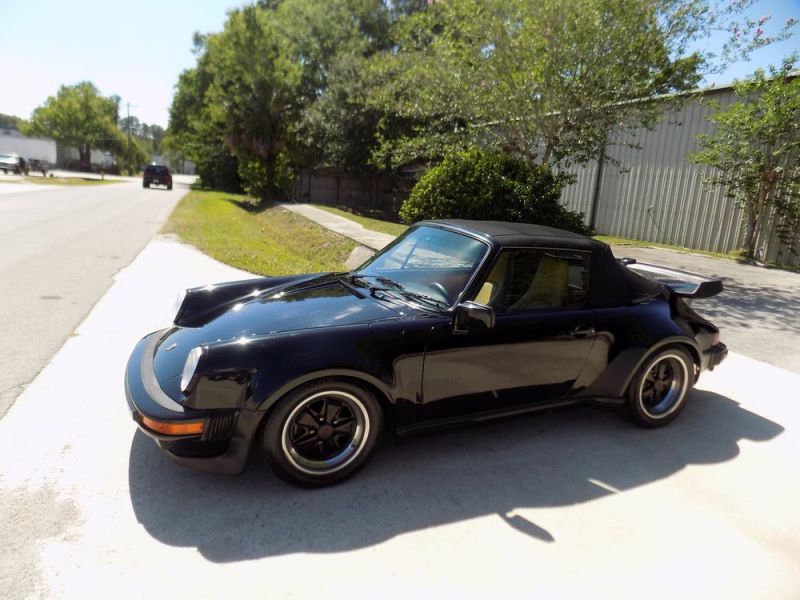 There were only 309 Turbo look Cabs made in 1987 which makes this car very Rare and Collectible. These Air cooled cars are rising everyday in value and this is one to own. It just had a major service and needs nothing. The black paint is excellent and is all Original. The under carriage is Spotless and show's nothing rusty.
The Interior is Champagne and It's Brand new. Original Carpet, New Original Mat's, New Original Leather seats that are dual power. The top is also brand new and its Black . Power top works perfect and has no latches it's 100 % automatic. When you open the door it smells like a new car and looks like a new car. The dash is Pristine with no warping or cracking . The door panels are also pristine . There is not much to say other then the interior is Pristine and new in every way.
Inside the car you will find everything to be working properly. Both power seat's work, Original radio with cassette . Cruise control . Power top and windows all work perfect. Ice cold Ac and hot heat.
Mechanically she is a Gem. The car just had over 5 k in service. The valves were adjusted , New 134 Ac compressor ,dryer and expansion valve. Its ice cold I replaced the Oil hoses on the engine to sum pump and also new lines to the Condensor .The front suspension is all new . Ball joints , sway bar links etc. The Brakes are cross drilled rotors and they stop this car on a Dime. The tires are in great condition and sit on Beautiful Original Fuch wheels with a Chrome lip.. The car drives very well and pulls hard through all 5 speeds with ease. The Clutch was replaced less then 2000 miles ago. The suspension feels very tight and this car handles like a 911 should. It has a nice tone from the exhaust and the Special Order Fitipaldi Steering wheel makes it truly exciting to hold on to. I have the Original one and its Brand new. The Dealer installed the Fitipaldi at time of Delivery. These are numbered steering wheels and very rare. I would drive the car anywhere. She is ready to go and needs nothing. All fluids were just replaced as well .

Porsche wants you to 3D print your own Cayman

Have you got access to a 3D printer? Well lucky you, because as we're rapidly learning, the possibilities are virtually endless. And if your tastes lean towards the automotive (as we'd assume they do if you're reading this page), we've got good news.
Porsche has just released 3D printing data for the Cayman S so you can three-dimensionally print out your own and customize to your heart's content. Now Porsche hasn't specified just to what scale the data will allow you to print your Cayman, but we have a feeling that'd mostly be limited by the size of the printer at your disposal. Check it out in the video below and follow the link to the Porsche site to download the file.