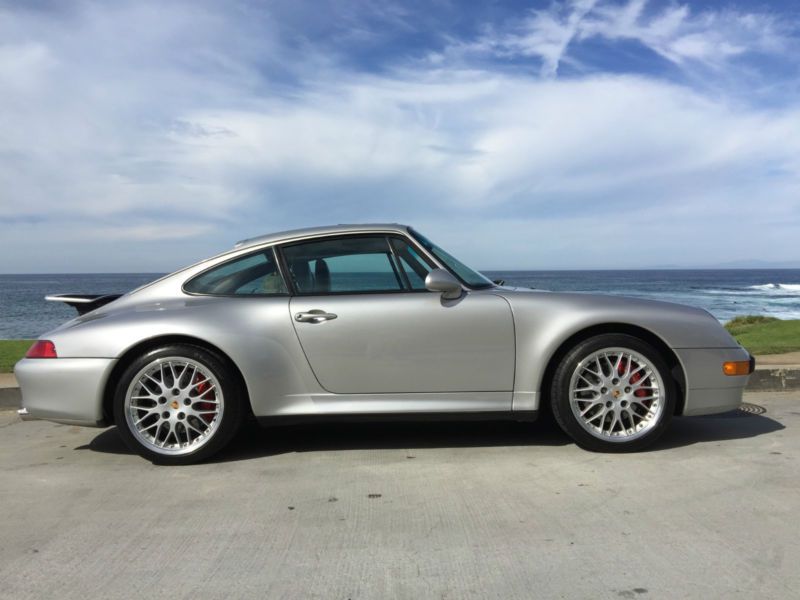 If you have more questions or want more details please email : rosamariarnnoullet@1me.net .

1997 Porsche 993 4S Coupe- 6 Speed Manual
One owner, accident-free, non-smoker, garage kept in La Jolla, California, and meticulously maintained/serviced at
the Porsche of San Diego dealership. All service records available since I took possession of the vehicle and are
logged in the computer system at the Porsche dealership. All routine maintenance performed on time. The oil has
been changed yearly with synthetic oil. This southern California car has never seen snow and has rarely been in the
rain. The vehicle comes with all original owner's manuals and 3 sets of keys. This 6 speed manual 4S runs, drives,
and sounds amazing with the air cooled engine and Porsche sport exhaust system. I thought I would never sell this
car and keep it in the family "forever." Unfortunately, circumstances in my life have changed, and it is time to
sell it for someone else to enjoy. As you can probably tell from the pictures, the vehicle has been well cared for
inside and out. All power options work well: seats, windows, sunroof, and rear spoiler. It was detailed inside and
out last week and is ready for a new owner.
Factory option packages include:
Motor Sound Package
Lumbar Support- Right and Left Side
Infra Red Security System
Xenon Headlights
On Board Computer
Supple Leather Front and Rear
Light Rootwood Shifter/Brake
Technic Package
Porsche Sport Exhaust
Power Seat Package
Digital Sound Package with 490
Light Maplewood Steering Wheel
Factory OEM Parts added after purchase:
2005 18" Wheels
Recent service:
Synthetic Oil change performed yearly throughout life of vehicle
New Battery- June 2016
Brake Fluid- October 2015
Passed CA Smog- October 2015
Sway Bar End Links- October 2014
Other details:
In June 2013, my odometer stopped working at 74.242 miles. I didn't feel that I needed to fix it because I didn't
think I would ever sell it. I have driven the car progressively less and less over the past 5 years and kept rough
track of the mileage when I filled up the gas tank. I estimate that I only drove around 300 miles last year and a
less than 4,000 miles in the past 3.5 years. I have continued to change the oil yearly. You will see all the
service records reflect the 74.242 miles since June of 2013, but there is a Carfax alert regarding the mileage on
my vehicle. When the vehicle last got a smog check, the technician recorded an estimated mileage instead of the
reading on the odometer. Upon the next service the mileage was again recorded from the odometer. This is what
caused the odometer alert on Carfax. I listed the car with a generous estimate of 78,000, but believe that it
actually has less than that. Please let me know if you have any questions regarding the mileage.
The front driver's side fender was replaced and repainted in May 2004 after my ex-husband hit it with a golf club
when we got divorced. The work was performed at Phil Thearle's Autowerks in Santee, CA. The vehicle had 61,012
miles at the time, which shows how little I have driven in the past 12 years.