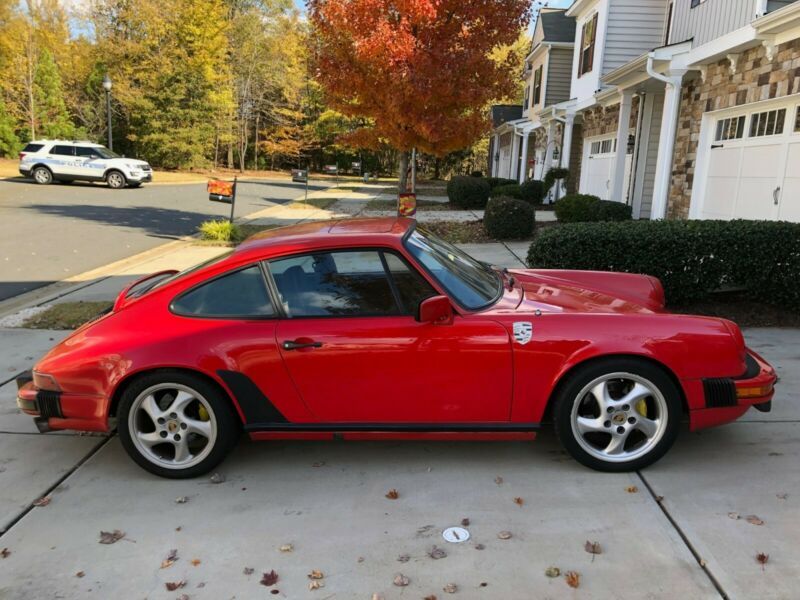 Power comes from a 3.0-liter flat-six paired with a five-speed manual trans axle,
and modifications include a basket handle spoiler, 17″ Turbo Twist wheels, yellow brake calipers, a dual exhaust
system, custom upholstery, aluminum pedals, a Momo steering wheel, a CD changer, and more. An oil change was
reportedly performed in February 2019. The car is finished in Guards Red with black trim and rear fender guards, and has reportedly been garaged
throughout its life. The hood and bumper have been repainted
Later-model 17″ Turbo Twist wheels wear staggered-width Continental Extreme Contact tires from 2011 up front and
2016 out back. Braking is from yellow four-piston calipers with cross-drilled rotors at all four corners.
The interior is trimmed in custom black upholstery with red piping and features a matching dash cover, carpets, and
branded floor mats. Amenities include a power-operated sunroof, air conditioning, and a JVC cassette stereo with a
trunk-mounted CD change
A Momo steering wheel has been added along with a custom shift knob, aluminum pedal covers and gauge trim, and a
fire extinguisher. Approximately 130k miles are shown on the nonfunctional six-digit odometer, with all mileage
added by the current owner. Total mileage is unknown.
The air-cooled 3.0-liter flat-six was factory rated at 172 horsepower with 189 lb-ft of torque and is linked to a
five-speed manual trans axle. An oil change was performed in February 2019 according to the seller.
An aftermarket dual exhaust system replaces the factory setup.