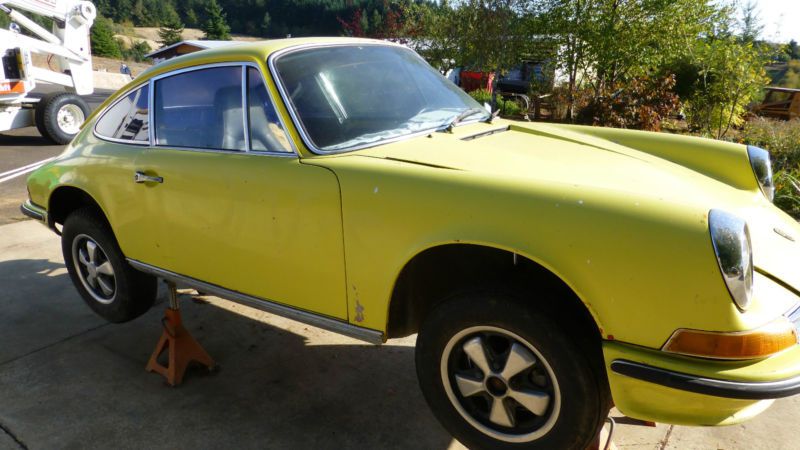 Just email me at: marlomuumstead@ukreps.com .

True "barn find". Last licensed in 1989. In storage for 25 years. Car I.D. #119220153. Engine I.D. #6290401. Almost
100% certainty that this is the original engine and transaxle, which I would almost bet have never been out of the
car. Buying the Porsche Certificate of Authenticity is a mute point considering the engine number completely jibes
with the VIN. This car has some surface rust but overall is quite nice. In comparison to most "barn finds", this
one is quite exceptional. Only real rust bubbles are on the lower portion of the right front fender, and even
they're not really bad. Also both headlight buckets on the inner fender side have minor rust in the bottoms of the
bucket, where the wire grommet was located.
This car has the complete air cleaner assembly, including ducting, which was removed to access the engine I.D.
number mounted on the right side of the crank case. Original Fuchs alloys with an alloy spare rim. I have removed
the fuel tank, which was 3/4's full of odiferous fuel. With a seep in a hose, I HAD to get it away from the car!
The fuel tank will most likely need replacing. The car appears to be 100% complete. The interior needs to be
restored. The dash top has no cracks. The head liner is even in good shape with no rips. Sorry no books, records or
original jack.
The condition of the engine/transmission are unknown. Original miles of 134,300. This car is a great candidate for
a restoration, where the body has very little repairs needed. Original paint color was orange, which for some
reason, it was repainted yellow. The heat exchangers on the engine have pretty much fallen apart and will need to
be changed.
All the glass is good, trim pieces all there. The wood pedal board is in the front trunk, which needs to be
replaced. I have NOT tried to turn the engine over, as I feel it should be oiled up before doing that.
With the car sitting for 25 years, it simply needs to be dismantled and overhauled. Trying to get it running as is,
would be pointless. I can take pictures of any part of this car. It's available for an inspection.