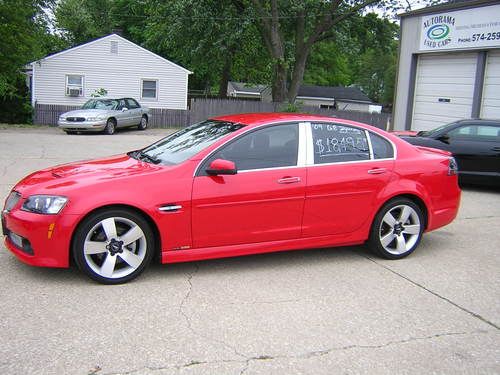 Rare car only in production for '08 & '09 ---Red and ready!! 2009 Pontiac G8 GT 4dr sedan - 22,000 miles- Rear wheel drive high performance sedan !!L76 6.0 V8 (360 HP),AT,full power, dual zone auto climate control A/C,heated seats,tilt,cruise,alloy wheels,factory high end Blaupunkt sound system. Sharp black leather seats with red inserts. This car has a rebuilt title due to minor water damage. We removed the carpets and cleaned and dried everything out. We thoroughly went over this car to make sure everything works as it should. It was inspected by the police before we could title it. It is 100% ready to go with no issues now or later .This is a very hard to find car and future(if not now) collector car. This is a very nice car---Carfax available--vin-6G3EC57Y09L217976
Autorama1023 W.Jefferson Blvd.Mishawaka,In 46545574-259-9112

We are a licensed Indiana used car dealer. We specialize in salvage and rebuilt titled vehicles and have done this for over 20 years. We have many repeat buyers on our cars. We fully go through all our vehicles before we sell them. You are buying great low mileage late model vehicles at way below wholesale. Feel free to call us for info
This G8 is offered for sale locally so we reserve the right to close or cancel this auction at any time
$500 deposit due within 24 hours of the close of the auction. PayPal or certified funds only.