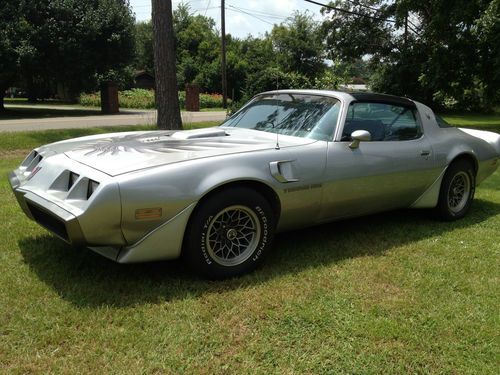 Condition: UsedA vehicle is considered used if it has been registered and issued a title. Used vehicles have had at least one previous owner. The condition of the exterior, interior and engine can vary depending on the vehicle's history. See the seller's listing for full details and description of any imperfections.Seller Notes:"Runs and drives good. Recently painted. Minor blemishes here and there. Interior shows it's age and some minor rust in floor pans. AC not working. New blower motor. New wiper motor but the switch is a little funky. Cruise control not working."

Nice 1979 Pontiac Trans Am. Has WS6 package with 4 wheel disc brakes and 8" wide wheels. Needs some interior work but drives good. Is currently registered and driven regularly. Selling this for a close friend who had to move and couldn't take it with him. He originally put this car together for his son to drive. Everything was done to make it road worthy. Brakes, suspension, etc. Axle seals were replaced. Rebuilt carb installed. Recently painted with new decals.(About 8 months ago). Car was sanded down to primer and only a small half inch rust spot was found behind one of the wheel flares. Repaired it and then car was professionally painted. Very little rust in this southern car. One hole I found in the passenger front floor pan. Fix that and put in new carpet and headliner and you will have a great driver. We are including the original interior door panels with new clips. I would replace them with new panels though to make it nice.Has minor issue with the controls for directing airflow for AC and heat. Probably vacuum control related. Always blows on the floor. AC is not blowing cold although it did work recently. May need charged.Also the wiper motor has been replaced but the switch for it is a little funky. Only working on high speed. That part was not available new when we were working on it. I just took it for a 50 mile cruise in the country today and it is a great car. My son loves it! Wish I could afford to buy it for him. :) Small issue with trans linkage. Sometimes doesn't go right into gear without moving shift lever around. Once in, it drives and shifts great. No slipping! Kick down for passing works fine. Trunk floor looks beautiful! See the pics. I can send specific pictures if you ask. Here is a link to

http://collectorcarmarket.com/menus/ccmprcs/79pofiam.html
I would rate this car somewhere between #3 and #4 condition. It shows the value around $9500 in #4 condition.  #3 condition value is around $15000. Body is really solid! Great car to drive as is or complete the restoration. All the hard work has been done.
Feel free to email me with any questions or offers. May be interested in partial trades. Mainly interested in motorcycles, golf carts, ATV's, etc. Let me know what you have.
Georgia does not require titles on older vehicles so it will be sold with a bill of sale and a copy of the current registration. We will be happy to work with you to help you get it transferred. We have sold numerous classic vehicles without titles to people in other states and have not had any problems. I may be able to deliver for a cost of $1.00 per mile within 250miles from 31089. Please email me if interested in delivery.