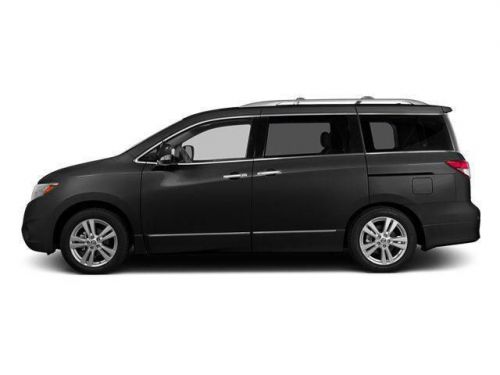 CALL ANY AVAILABLE SALES MANAGER TODAY AT 888-587-5578 FOR MORE INFORMATION! Bill Ray Nissan insist on only the best for their customer satisfaction. We do not just want your business today.we want you to come back in the future, too.Inspired by super high-speed trains, the 2014 Nissan Quest cuts a bold silhouette that stands out in a crowd. It features distinctive rear wraparound glass, and a dipping side character line that makes it look like it's on the move, even when it's parked. Quest's available one-touch power sliding doors make loading up easy. Quest's interior seating can be configured to your preference. The sliding and reclining second-row captain's chairs fold flat with the pull of a lever, and the quick-release third-row bench seat easily folds flat or can be configured into a 60/40 split. The cargo well behind the rear seats is always open for business, thanks to third-row seats that fold forward. The Nissan Intelligent Key lets you tap a button on the door handle or hatch to unlock Quest, while your keys stay in your pocket or purse. Quest's legendary 3.5-liter V6 engine features an advanced valve timing system that optimizes its power and efficiency. The engine is paired with Nissan's Xtronic CVT creating a smooth ride with no shift-shock. Using hydro-electric power steering instead of hydraulic power steering cuts down on the amount of power needed from the engine. And that means more miles out of every tank. Front and rear vented disc brakes rapidly dissipate heat, giving you fade-resistant, sure-footed stopping power. The Nissan Advanced Air Bag System includes dual-stage supplemental front air bags with seat belt sensors and an occupant-classification sensor. Also, roof-mounted curtain supplemental air bags help protect you in the event of a side impact or rollover. The Pathfinder LATCH system lets you secure LATCH-compatible child restraints in the second row without having to use seat belts or a locking clip.