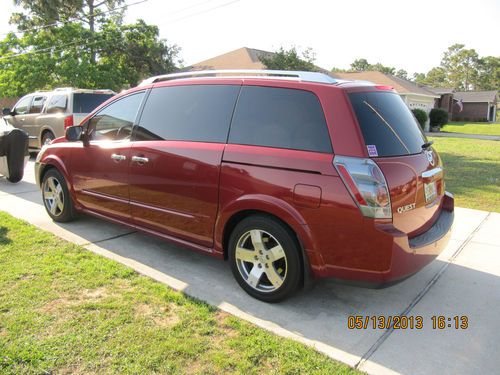 A/C ice cold, Factory GPS system, Fully loaded with all the goodies, Looks & drives great, Must see, Never seen snow Florida driver, No accidents, Non-smoker, Satellite radio with aux plug for iPod or MP3 players, factory back-up camera, Chrome roof rack rails, Power Side and Cargo doors, Very clean interior, Well maintained. Very nice van, equipped with every option available from the factory. Standard equipped with 17" factory aluminum wheels with run flat tires. Tires still have about 75% tread remaining. 3.5L V6 engine has lots of power as well as being great on the road. Excellent family vehicle for travel as well as everyday use. Contains two Nissan factory inline DVD screens for convenient viewing by 2nd and 3rd row passengers. Moon roof glass with closable visors overhead 2nd and 3rd row passenger seats (very nice feature) as well as standard sun/moon roof with wind deflector to quiet wind noise. Only minor paint scratches and carpet wear. Our other vehicle is an Infinity fullsize SUV and our van is always the first choice for family trips when comfort is desired. We are a military family moving overseas so our vehicles must go. Motivated seller. This is my wife's daily driver so the actual milage may be slightly higher at time of sale due to daily use.