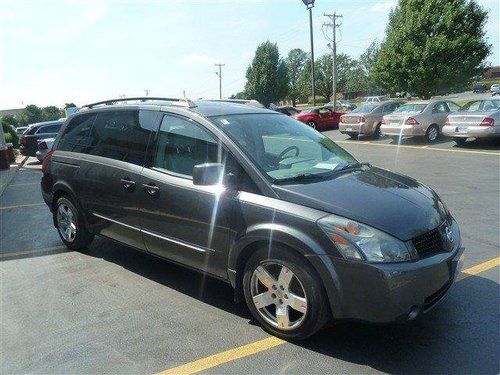 Selling because we have outgrown it. This van is a sweet ride. Seats 7. 4 captains chairs & a 3rd row bench. We are now needing an 8 seater. If you want an option I am sure this van has it because it is fully loaded. It is a great family vehicle. 6 cd changer, 2 dvd screens, bose sound system, 4 moon roofs, 1 power sunroof, leather seats, front seats heated, navigation, back up camera, traction control, adjustable pedals, 2 person memory, remote start, hitch, roof rack, power windows & doors, power sliding doors & lift gate, does have some cosmetic damage: small hole in front bumper from motorcycle peg, nusted right side of bottom of back bumper this winter & a couple other dings that are hard to see because the color hides things well. Outside is gray, inside is light gray. Newer tires, oil change 2 days ago, just replaced passenger ball joint & arm bar. Had oil leak but it was just the seal that goes on the oil filter. A/C will freeze you out, heat works great. Cruise control.
If you have any questions please ask & I will answer as quickly as I can. I am looking to buy a bigger vehicle Monday & so I will still be driving the van until atleast then. I plan on getting good pics of it this weekend so if you would like pics message me with your email address. I do still have a loan on this van but the bank is aware that I am selling it & the title will be mailed from my bank to the buyer.
I may cancel this auction early if a reason may come up, for example the deal falls through on the one I am buying & I will still need this one a while longer.