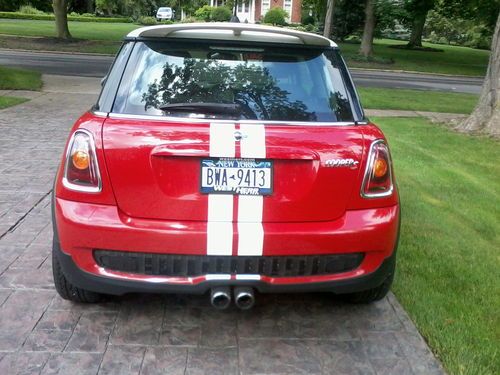 When Mini first introduced the Countryman, it only came as a four-seater, with a center rail between the two seats that could house things like cup holders and could be slid back and forth. Buyers could even opt for a full-length center rail that ran from just aft of the gear shifter all the way back between the rear seats, like we did in our long-term 2011 Cooper S Countryman All4, shown above.
Shortly after the Countryman's launch, Mini was able to offer the vehicle with a proper rear bench seat; the company could not offer this at launch due to NHTSA guidelines that governed the minimum vehicle width for three-person seating, but those rules were changed. And now, we've received official confirmation of something we reported last year: the Countryman is losing its center rail and four-person seating arrangement altogether. Moving forward, buyers will only be able to spec a Countryman with the bench seat, and a cup holder will be affixed to the back of the forward cabin's center console.
The larger-but-smaller Paceman will also be losing the center rail between its rear seats, but the car will remain a four-seater, instead having a console between the two rear seats that houses a cup holder, an iPod cozy and a 12-volt outlet, according to USA Today.