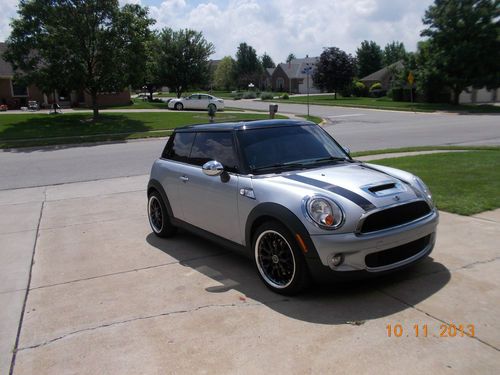 This is my wifes car and has always been adult woman driven and never abused. It has every option Mini offered that year. Runs and drives great. Good run flat tires and nice looking aftermarket wheel. Tinted windows look good. Also have a set of matching mini cooper floor mats. It has been a great car my wife is just ready for something different.

Now for the bad it was hit in the rear about two weeks ago and has damage to the hatch and bumper cover. I have an estimate from a local body shop (Church Brothers) for $2900. But I think if you could do the repairs or shop around you could fix it for quite a bit less. I can fax or email a copy of the estimate upon request. It has 62900 miles on it now but is still driven so it might get another couple hundred miles put on it. You are welcome to contact me and schedule a time to look at the car.

Mini blows up over women applying makeup in cars

Distracted driving is a very real problem. From drivers with phones dangling from their ears to those constantly adjusting the stereo or dealing with rowdy children in the back seat, anything that diverts attention away from the act of driving is a potential danger. And yes, that would indeed include applying makeup while driving.
Publicis, the advertising agency used by Mini in Mexico, came up with an inventive (or offensive, depending on your point of view) way of reminding female drivers "that there's a time and place for everything." And while we're not quite sure of the veracity of the statistics cited in the video below, or even the necessity of its production in general, perhaps we'll just take it as a reminder to pay attention while driving... no matter what else happens to be on our minds. Or faces, as it were.
Scroll down below for the explosive demonstration.