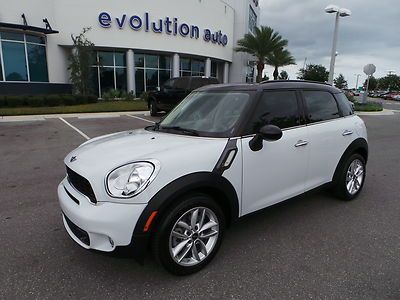 Mini shows how to camp in style

If you're the type of person who loves spontaneous road trips and camping, and Volkswagen's Camper Vans aren't your style (or you can't find one for sale in the US), then Mini has what you're looking for: the Clubvan Camper, Cowley caravan or Countryman ALL4 Camp. Unfortunately, Mini says there are no plans to offer any of them for sale. And no, this doesn't seem to be a recycled April fools joke, in which Mini touted the Swindon Roof Top Tent and Cowley.
Let's start with the Clubvan camper, a curious prototype that has a sleeping area for one and an extendable kitchenette featuring a stove and chest fridge. And we say curious because, in addition to not being offered for sale anywhere at this point, the Camper is based on the Clubvan, which was just pulled from US dealerships due to low sales volume. This thing definitely isn't coming to the US.
The Cowley caravan, named after Mini's historic factory in England (known today as Plant Oxford), can be towed behind a Mini vehicle and features a sleeping area for two, a twin-burner gas stove and a water tank complete with pump and sink facility. It looks quite comfortable in there. The Cowley uses a solar panel to charge its onboard battery, and it has a 230-volt connection to power the fridge and entertainment equipment.