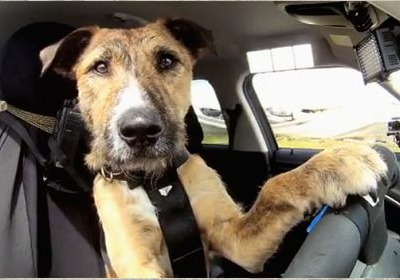 No, this isn't an April Fool's joke or some sort of wacky car commercial. It's the SPCA Auckland (located in New Zealand) coming up with an innovative way of proving that it's possible to teach a rescue animal new tricks. Monty, Porter and Ginny are all dogs rescued by the SPCA Auckland, and each was taught the ability to drive a Mini Countryman around a track.

After being strapped into the driver's seat, the dogs are able to use their paws to start the car, steer it and work the gas and brake, which have been modified similar to a car setup for a special-needs driver. These dogs aren't being trained to drive on the street as any sort of driving-eye dogs, rather it is just a demonstration of how smart and docile rescue dogs can be regardless of how they ended up there. Porter was found wandering the streets, Ginny was abused by her owners and seized by the SPCA and Monty was surrendered by his owners to the rescue. Ironically, Porter and Ginny initially got carsick during the exercises, but have since gotten over this.

Think it's a joke? Scroll down to watch four videos showing the dogs in action and another to see what mods were made to get the Mini ready for canine duty. In the first video, you can also see that Porter does a better parking job than most humans!