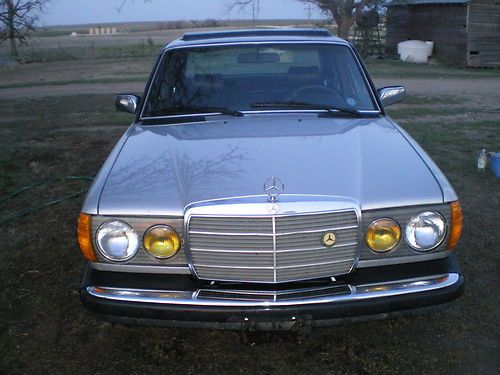 This is a Silver Mercedes Turbo Diesel 300D Classic luxury car 1982 model. Great condition, garage kept, non-smoker, NICE and clean black leather interior with lots of quality chrome on the inside and out. It has minor flaws, but not bad at all for a 30 yr. old car. The clear coat on the driver's side fender and door is fading, but the rest of the car looks really shiny! Everything works, including the A/C! A/C has been charged this spring and blows cold. It gets 30+ mpg's and has a reliable legendary motor. It can be run on diesel, biodiesel , uvo, or umo to save a ton on fuel. (Google it! :)  It has new tires and a full sized spare tire with a matching original wheel. It also has its original first aid kit, manuals, and tool kit. We had the injectors professionally rebuilt with special tips for burning alternative fuels. It has new motor mounts and transmission mount. It also has a fresh oil change. We have a clear title in hand and two keys. We are selling it because our family has outgrown it and need a third row.  You can call or email with questions 806-658-7841 or text 806-202-6181 Thanks for your bid! :)