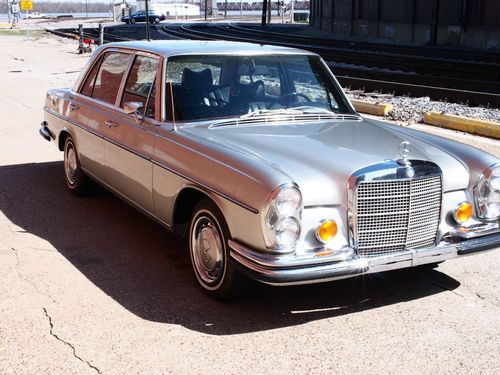 This is a no-reserve Auction.

Over the years I have bought and sold several cars on eBay.  This is the only car that I have purchased where the seller very deliberately misrepresented the car.  As a result, I paid much more than it was worth, and I am sure it will sell for far less.  I have listed this without reserve for a few reasons: 1) Whatever the final price is, will be what the market determines, so the new owner will get a fair price 2) I just want the car gone, it's a bad memory for me.
That said, it's not a terrible car.  It has its good points and its bad, I will do my best to point out both.  Please read all my text.
If you are not familiar with these cars, the 300SEL 4.5 is a very low production car relative to the rest of the MBZ sedan line of the time.  I believe only 2,533 of these we're built vs.27,641 other W109 cars and 322,825 of the very similar-looking W108 cars.  In 1973, this was the top line MBZ sedan of the W109 series with the air suspension.  These succeeded the mighty 300SEL 6.3 cars (of which over 6,500 were built), with a less powerful, but far less complicated engine.
The car is titled as a 1973, the build date is 7/72, I am not sure if it was an early '73 model-year car, if it was simply sold in 1973 and titled then, or if something was fumbled along the way, the VIN and title do match otherwise.
Good:
The car overall seems to be solid and without major rust or rust repairs
The car runs well (see also the bad)
The suspension is perfect - the car stays up for months (meaning 3+ months at a time in any weather)
Good and matching tires all around
Recent paint (see also the bad)
The seats and most of the interior are in better than average shape
The a/c actually blows cold!
The radio and antenna work
It does not leak oil of any sort
Steering tight and straight, no pulls or vibrations
Brakes work well, stops straight
Chrome is in overall good condition
Floors are solid
The bad:
The respray was a quickie, the car was masked and not exceptionally well masked, there is overspray on the undersides of the car and on some of the suspension. The paint that is on the body looks very good, and it was well prepped other than it should have had all the trim removed, etc.
The sunroof is inoperable as you can see.
Some of the interior wood has been refinished to a low standard
Some of the interior trim is not attached
There are several interior trim parts that need to be properly attached, but are not unattached
Some of the exterior trim parts need to be properly attached as well, they are there, but loose
The car does smoke a bit on start up, but oil pressure good and smoking does seem to stop
There is some rust in the wells of the trunk, but not rust through
The under-hood pad is in poor condition
Seats are not perfect, but no tears and not dyed or dry
I have not driven this car extensively.  I bought it, was disgusted, and put in storage with only an occasional drive.  The car was driven and washed for the photos for this ad and for me to determine that the car is basically sound, but that is about the extent of it.  I cannot tell you that you could get in it and drive it anywhere without a problem, since I have not done that myself.  On my other W109 cars, I can tell you that with confidence because I've done it.
By the way, if you're wondering, I did consider legal action against the seller, but frankly, it's just good money after bad and not worth the effort.
IMPORTANT: I want you to be happy with the car, meaning that you get what you expect to get for the price you're willing to pay.  To that end, I am more than happy to tell you what I know and to get you any photo you'd like to see, you are more than welcome to inspect it yourself
The rest:
The deposit is non-refundable, no exceptions.  I expect the payment terms to be adhered to, if they aren't and I don't hear from you, I will re-list the car.  You will need to talk with me on the phone to arrange for final payment, shipping, etc.
I am happy to store the car for up to 30 days in a secure, enclosed building at no charge.  I will be more than happy to assist the shipper you hire, or if you're feeling like an adventure, to pick you up at the airport!
Thank you for looking