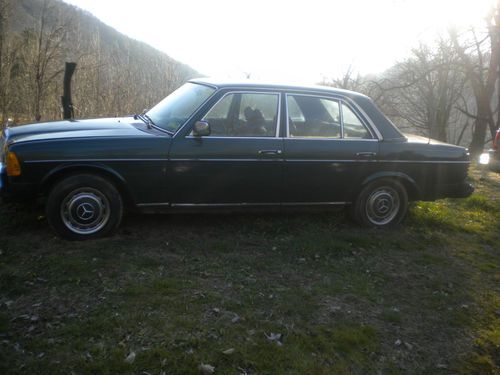 Condition: UsedA vehicle is considered used if it has been registered and issued a title. Used vehicles have had at least one previous owner. The condition of the exterior, interior and engine can vary depending on the vehicle's history. See the seller's listing for full details and description of any imperfections.Seller Notes:"Car has scratches peeling paint, no key etc"

Up for your consideration today, is a 1979 Mercedes model 240D, which of course has the 2.4 L diesel engine (non turbo) This car is said to have had the engine replaced by mercedes 50k miles ago, but I have no paperwork to prove this, but also know the man I go the car from, and believe what he says, but take it for what it is worth. As the car sits now, there is no key, and part of a screwdriver broken off in the switch. We tried using the vin to get a key from the dealer, but it did not fit the car. So, the steering is currently locked, and the car can not be started. I have a clear West Virginia title in my name, that will be signed over to you before the car is released.

The green is not original to the car, and not the best paint job either. It used to be a kind of creme colored white. I will sell this car complete, or be more than happy to sell you parts. The price of any part you may want will depend on if you come pull it, or I do.