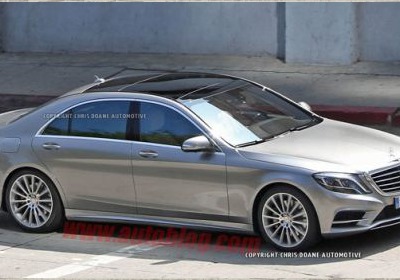 Based on the lightly camouflaged spy shots of the 2014 Mercedes-Benz S-Class we've seen lately, it hasn't taken a vivid imagination to picture what the next iteration of this big luxury sedan will look like. Even so, we now we have our first unobstructed views of the redesigned S-Class, codenamed W222, as it has just been caught out flaunting for some promo shots.

The first thing we notice about the new S-Class design is the disappearance of the last generation's flared wheel arches. Yet the new design adds even more character with bodyside creases similar to the CLS-Class and some elements reminiscent of 2007's F700 Concept, including the massive grille and vertical LED taillights. Other key details include a large panoramic roof and the narrow exhaust outlets, but the large LED-trimmed headlights and the aggressive front fascia are probably the biggest departure from the current design. With these spy shots, we also catch a blurry shot of the interior, but we've seen a practically uncovered look at the new S-Class' cabin back in January.

Overall, the next S-Class sports an expressive and premium new look, but as far as all-new designs go, it's quite conservative – a move no doubt fitting for these lean financial times.